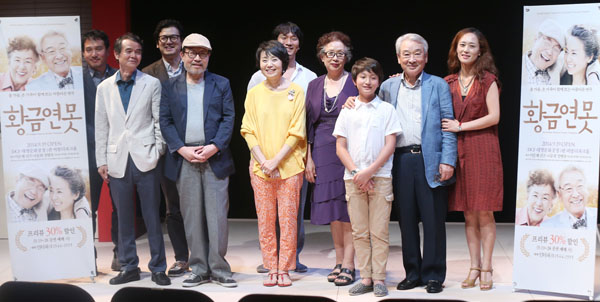 Veteran actors including Lee Soon-jae, second from right, and Shin Goo, second from left, will stage the play “On Golden Pond” from Sept. 19 at the Soohyunjae Theater in Daehangno, central Seoul. Provided by the organizer

Every day, dozens of musicals and plays are staged at numerous theaters in Daehangno, central Seoul, but it seems like younger generations tend toward action-packed musicals with flashy lights over plays where the drama unfolds slowly.

Despite the preference, four familiar faces from TV will star in a play this fall - Lee Soon-jae, Shin Goo, Na Moon-hee and Sung Byeong-sook - likely drawing in audiences of all ages.

The four will be featured in “On Golden Pond,” a famous play written by Ernest Thompson, which was also made into a movie and a TV drama.

The play is about Norman and Ethel, who spend every summer on Golden Pond. During their stay, the elderly couple’s daughter Chelsea visits them with her fiance Bill and his son Billy, and asks her parents to take care of the boy while the couple goes to Europe.

The play explores life philosophies and love through conflict and humor.

While actresses Na and Sung are double-cast as Ethel, actors Lee and Shin, who appeared in the tvN reality show “Grandpas Over Flowers” earlier this year, alternate Norman’s role.

It is very common to double- or triple-cast actors for a musical or play in Korea.

The reason for this could be a performer’s lack of singing or acting ability. It could also be because of their busy schedules since many popular singers and actors star in plays these days.

“I don’t like the idea of double-casting,” said Shin at a press conference in Soohyunjae Theater, central Seoul.

The actor, who is being double-cast in a play for the first time, talked about the inconvenience of interacting with one Ethel one day and another the next.

“Acting with two Ethels is confusing for me, because we [Shin and I] don’t get enough time to rehearse with each Ethel. It’s each and every actor’s decision to make, but I don’t want to be double-cast for a play again.”

Lee agreed with Shin. “There’s only one actor cast for a character in a play. This is a rule. Actors agree on being double-cast because they are busy, but at the same time they want to take part in a play. And yes, switching partners is confusing,” Lee said.

The two well-known stars also gave some advice to budding actors starting out in TV or film.

“I hope they get to experience a stage play. It will be a huge help for their career,” said Shin.

Lee, whose acting career began on stage, added, “I understand some young actors’ careers began from modeling, singing or from the very bottom through a stage play in Daehangno, but the most important thing is for them to understand the spirit of acting.”

Na, who has appeared in multiple TV dramas, films, as well as the MBC sitcom “Unstoppable High Kick” with Lee in 2006, said, “It’s comfortable to play a couple with Lee again. Sometimes it feels like I’m working with my real husband.”

The actress said the fact she gets to interact with the audience and receive applause immediately after the show are the reasons she keeps acting on stage.

“It’s a great honor to work with experienced actors,” said Sung, the youngest among the leads.

When asked about the performances of her co-actors, the 59-year-old actress praised Na. “When I saw Na playing Ethel, I thought, ‘That is the Korean version of Ethel.’ Na is a typical mother and wife in Korea. I’m sure viewers will be sympathetic to her Ethel.”

In addition to “On Golden Pond,” the original Korean play “The Lost” is being performed at Soohyunjae Theater.

The play, co-produced by an eight-member scriptwriter group called Dok and Soohyunjae Company, is divided into two parts, each with three episodes.

Every episode takes place on Dec. 26, when all the Christmas parties finish and one feels empty and lonely.

While “On Golden Pond” audiences will leave the theater thinking of their loved ones, “The Lost” makes its viewers wonder what they are missing out on in life.