At Berlin IFA, Samsung and LG pioneer the curves

At Berlin IFA, Samsung and LG pioneer the curves 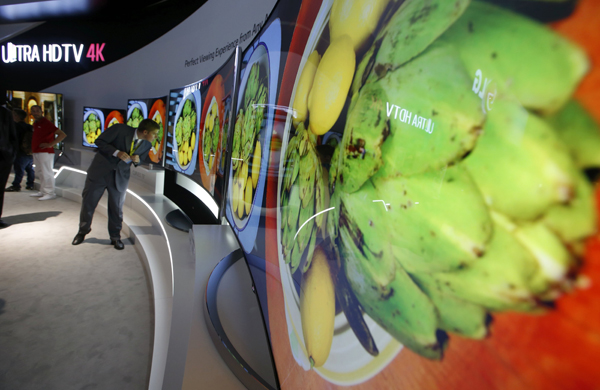 Curved TVs displayed at LG’s booth at the IFA. [REUTERS/NEWS1]


One of the key buzzwords at Europe’s largest consumer electronics fair, the Berlin IFA, is curvy tech, which Samsung Electronics championed at the same global event a year ago when it introduced the world’s first curved TV.

Now global competitors from Sony to Chinese companies such as TCL and Haier are struggling to keep up on the curves.

Another key buzzword in Berlin this year was “smart home,” which the Korean tech company hopes it will also dominate by creating an entirely new ecosystem, as Apple did with smartphones in 2007.

Europe’s largest electronic consumer goods show kicked off on Friday and winds down today. Samsung further raised the bar this year by introducing a bendable 105-inch UHD TV. The TV - a prototype not yet ready for sales - changes from a flat screen to a curved one on command.

This was not the first bendable digital TV to be introduced.

At the CES in Las Vegas earlier this year, Samsung introduced a bendable 85-inch LED LCD TV that changes from flat to curved by hitting a button on a remote controller. At the same event, LG Electronics demonstrated its own bendable OLED TV.

This year’s bendable TV is larger and is equipped with a higher resolution screen than the LCD version that appeared earlier this year.

The TV wasn’t the only gadget that boasted a curved design. Samsung introduced what it calls a “total curve solution,” which includes a curved sound bar to use with the TV with wireless connectivity. According to the company, the curved audio system enhances the sound system of the TV.

The leading Korean tech company exhibited more than 70 of its products, including a lineup of 48-inch to 105-inch ultra-high definition TVs at a separate exhibition hall covering an 8,700 square-meter area, which is a first for the IFA fair.

Samsung emphasized that it pioneered the curved TV trend through a collaboration with renowned digital artist Miguel Chevalier. An art installation entitled “Origin of the Curve” was exhibited at the company’s booth. Made out of 26 units of 65-inch curved TVs and 12 sets of audio units, vibrant color patterns and sounds changed interactively as people passed by.

LG Electronics challenged Samsung at the Berlin exhibition with its own technology using OLED display. OLED displays are superior to UHD TVs in terms of picture quality, but they tend to be significantly more expensive.

Beyond the Korean companies, China’s TCL unveiled the world’s biggest curved TV at 110 inches, larger than Samsung and LG’s largest, which are 105 inches.

Other Chinese companies - Hisense, Changhong and Haier - all introduced UHD curved TVs between 60 inches and 70 inches.

China is currently the world’s largest market for UHD TVs.

Since Samsung first showed the world’s first curved TV at IFA last year, international TV consumer electronics companies have raced to catch up. It’s hoped that curved TVs and OLED displays will revitalize the market after shipments and revenues started to sink after the TV market reached its peak in 2011.

According to a report by NDP DisplaySearch in April, curved TV shipments are expected to reach nearly 800,000 by the end of this year and exceed six million units in 2017.

“The novelty of curved screens is expected to wear off with time, leading to shipments peaking and then trailing off,” said Paul Gray, director of European TV research for NPD DisplaySearch. “Even so, curved screens will have completed the important task of differentiating new high-end models, thereby helping to boost overall value in the global television market.”

Another trend that the Korean companies have been trying to push this year has been a so-called smart home, which uses Internet of Things technology.

“The home of the future is not about the technology, nor is it about being smart and connected,” Yoon said. “It’s about human-based innovation. It’s about technology that isn’t overwhelming and works discreetly behind the scenes to adjust to consumers’ needs at the right time.”

In realizing this dream Yoon urged the consumer electronic industry to participate in open industry standards.

“I don’t want Samsung to be remembered as a technology company,” Yoon said. “I want us to be remembered for providing unique experiences, because true innovation today is centered on people and their dynamic needs and lifestyles.”

LG also demonstrated their own smart home where the appliances are controlled through chat apps.