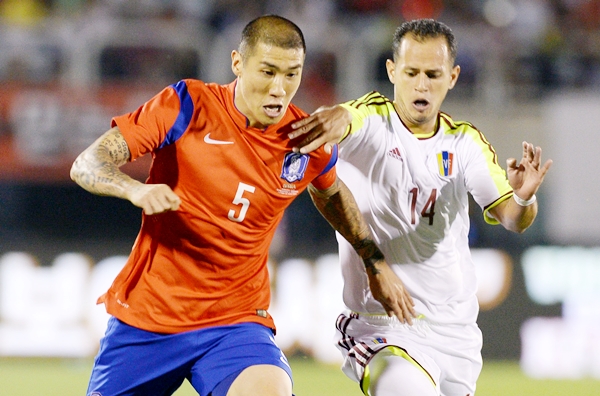 Defender Cha Du-ri, left, plays against Venezuela on Friday. He is the second oldest member of the team since retruning after nearly three years. [NEWS1]

After being named as part of the national team for the upcoming Asian Games, footballer Cha Du-ri posted on one of his SNS profiles the sentence “Irgendwann kommt das Ende,” German for “Eventually the end will come.”

Cha, 34, rejoined the Korean national team this month after being left off the roster for two years and 10 months. His recent post seems to show that he thinks this might be his last chance to represent his country.

“In the K-League, Du-ri [of FC Seoul] runs more and harder than the young players,” said Shin Tae-yong, who is temporarily managing the Taegeuk Warriors and formerly managed Seongnam FC. “Lee Dong-gook, [35], will lead the attack and Cha will take care of defense.”

Cha, who was first selected to play for the national team in 2001, has made the most out of his football career. While he was on the team, they advanced to the semifinals of the 2002 FIFA World Cup at home and made it to the Round of 16 of the 2010 South Africa World Cup, reaching that stage in a foreign country for the first time. And he became well-known among football fans, earning the nickname “Chaminator,” a combination of his surname Cha and “Terminator,” in reference to his great strength.

He was an indisputable right fullback under coaches Huh Jung-moo, 59, and Cho Kwang-rae, 60, playing 65 A-matches, but he was excluded from the team after Choi Kang-hee, 55, took the reins in December 2011. Hong Myung-bo, 45, who played with Cha in the 2002 World Cup, also did not select Cha for the national team when he was coach from June 2013 until July this year.

Hong failed to lead Korea to the Round of 16 in this year’s Brazil World Cup, in part due to a lack of solid right fullbacks and veterans who could help guide the team. Cha was exactly the person who could have served both purposes.

Instead, he watched the national team lose to Algeria in June as a commentator for SBS, and he shed tears after the game saying, “I’m sorry that older players weren’t good enough to play [for the World Cup].”

When the Korea Football Association let Hong stay on as coach even after the team was eliminated in the group stages with one draw and two losses, Cha left a message on his SNS that read: “Then why [did my father have to be dismissed] alone in 1998?.” His father, 61-year-old Cha Bum-kun, the Korean football legend, was fired as national team coach after the 1998 France World Cup due to the team’s poor performance.

“If I compare my life to a football game, I’m losing 3-5 on 85 minutes,” said Cha in an interview two years ago. “Winning the game of my life is to outpace my father. I think I have scored three goals because I’ve been to semifinals and overseas Round of 16 in World Cups. If I manage to score one more, the fans will give me warm applause even though I lost the game.”

It will be difficult for Cha to outplay his father, who scored 98 goals in the German Bundesliga, but he is working to score once more to make it 4-5.

He greatly contributed to FC Seoul’s advancement to the semifinals in the Asian Football Confederation Champions League and FA Cup this year.

“Having their best days over [the age of] 30 may run in their blood because Cha Bum-kun also scored 17 goals [in a season] when he was 33, which is the most goals scored [in one season] by a Korean playing in Europe,” his friend and fellow SBS newscaster Bae Sung-jae said. “Du-ri loses 3 kilograms [6.6 pounds] after a match, but he still has his abs.”

Though he is the second-oldest member of the national team after Lee Dong-gook, Cha isn’t bossy at all. When the nation team gathered at the training center on Sept. 2 for practice, Cha wore a baseball cap and played tag with Son Heung-min, who is 13 years younger than him.

“I want to help the country’s football so that it doesn’t regress, and I will keep trying to stay on the national team until I finish my career as a player,” Cha said at the training ground.

In an interview on Sept. 3, he said: “I’m still not sure I deserve to be on the national team. A veteran who doesn’t perform well will only be a burden to other team members. I haven’t mentioned it but I have personally decided when I will end my career.”