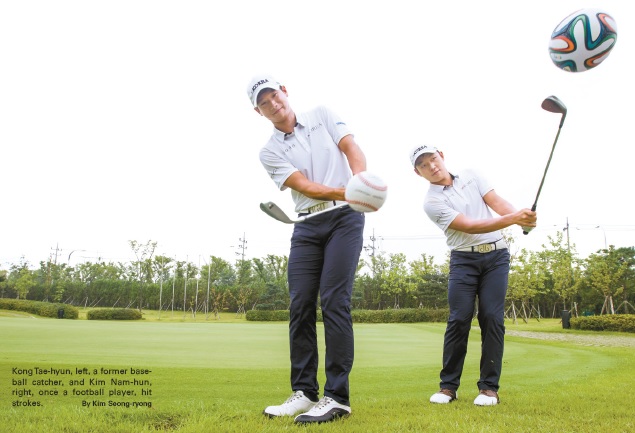 
Kim Nam-hun and Kong Tae-hyun, two 20-year-old members of the national golf team, seemed to be more interested in a football and a baseball glove that were used as props in a photo shoot. Kim, once a football player, and Kong, a former baseball player, are now looking to pick up gold medals at the 2014 Incheon Asian Games later this month.

Golf at the Asian Games is set to begin on Sept. 25 at the Dream Park Country Club in Incheon. The four male players and three female players on the national team are aiming to win all four gold medals in individual and group matches.

The golfers will play 72 holes over four days. Those who hit the fewest strokes overall win individual medals. The group medals are decided by adding the scores of the top three men and the top two women each day.

The men’s team, which includes the two 20-year-olds, Kim Yeong-wung, 16, and Yeom Eun-ho, 17, is expecting to make its third consecutive sweep of the individual and group matches. South Korea won gold medals in both categories at the 2010 Guangzhou Asian Games and the 2006 Doha Games.

But this year’s tournament will pose the biggest challenge ever, as contestants from Japan and Taiwan have become far more skilled and will not let the Korean golfers take the gold medals so easily.

“All members of the men’s team are in good shape, so any of them are good enough for gold medals,” said Bae Seong-man, a coach for the men’s team. “I just hope Nam-hun and Tae-hyun will lead the team well.”

Kim, who is in his second year at Sungkyunkwan University, was a football player until sixth grade and Kong, in his second year at Honam University, was a catcher until ninth grade. Their experience in other sports has helped them keep up with other players during training, such as when the team runs 20 rounds on the track at the Korea National Training Center in Nowon District, northeastern Seoul.

Kim’s football coach at Sinmoon Elementary School in Seoul encouraged the young athlete not to switch sports, but golf was more attractive to him.

“Soccer is attractive because I get to cooperate with teammates, but overcoming challenges alone in golf is as attractive as soccer,” Kim said.

Kong began playing golf after he was injured playing baseball. He was a left-handed hitter, but he plays golf right-handed.

“There were no posts for left-handers at my indoor driving range,” said Kim when asked why he switched hands.

“If I began golf left-handed, it would have been difficult to get rid of my habits from baseball swings.”

Kong has proven that he’s willing to work hard. He was selected for the national team only five years after he started golfing.

“When I first began golf, it was like changing my diet from Korean to Western food, so I practiced my swing for 13 hours a day,” he said.

“Baseball is fun,” he added, “but not as fun as golf because I don’t have to worry if teammates make mistakes and I can just focus on my game.”

Kong is a power hitter even in golf. His tee shots are longer than 300 meters (328 yards), and he even put the ball on the green on a 364-meter par-4 hole in a competition when he was a senior in high school.

Though Kim and Kong prefer golf because they can play as individuals, they were determined to work as a team to win a group gold.