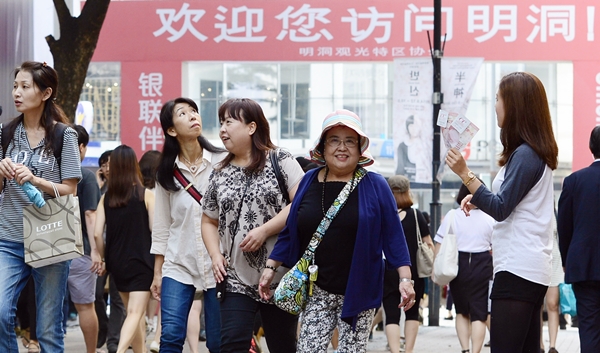 Myeongdong in downtown Seoul is crammed with Chinese tourists visiting Korea ahead of the Chuseok holiday season. [NEWS1]

The Chinese have not merely changed the cityscapes of the shopping district of Myeongdong in downtown Seoul and the resort island of Jeju. Numbers tell the story better.

The first number is 54.7 percent, which represents China’s share of foreign purchase of Korean equities in the first seven months of this year. The Chinese bought 1.89 trillion won ($1.83 billion) worth of Korean equities during this period. Korean Inc. is now partly in the hands of the China Inc. Share prices in cosmetics company Amore Pacific and rice cooker Lihom-Cuchen, whose products are popular among the Chinese, have doubled or tripled.

The Chinese are also sweeping the mergers and acquisitions market. Chinese capital of 960 billion won was invested in the first half of the year. Their capital investments ballooned by 80 times over the last six years. Hefty investments of more than 10 billion won in such companies as infant clothes maker Agabang and entertainment company Keyeast were included. One investment consultant said there is money to be made connecting Korean companies and Chinese capital. The fate of Korean financiers now hinges on their connections with Chinese capital.

The second number is 580.7 billion won, which is the value of the land on Jeju Island owned by Chinese. They now own 296 times more land in terms of acreage compared to five years ago. In terms of value, the amount is 1,452 times more. Real estate investment surged after the southern island in 2010 entitled residential permits of five years for a foreigner who invests more than 500 million won in resort facilities. The Chinese are now the primary drivers of the economy of Jeju.

Park Yong-sung, chairman of Doosan Heavy Industries and Construction, recalled how he had to ask himself whether he was in China or Korea whenever he enters the lobby of the luxurious Shilla Hotel. This Chinese invasion has triggered various groundless rumors. Some suspect illegal criminal organizations are behind the Chinese capital. But the rumors are nothing but groundless, prejudiced hostility toward Chinese investors and tourists.

The third number is 3.2 percent, the share of consumer products in Korea’s exports to China. China has transformed itself from being the world’s factory to one of its largest consumer markets. The Chinese are the biggest consumers after the Americans. They account for 28 percent of luxury item sales in the world. Still, Korean companies mostly sell parts, materials and capital goods to China. But the faster Chinese technology advances, the less Koreans will be able to profit from its exports there. Overall Korean exports by value as of August rose more than 2 percent from last year, but in terms of volume, shipments to China fell 4 percent. We can no longer earn money by selling technology-related commodities to China.

The fourth number is 3.3 million won, which is the average amount a Chinese tourist spent last year during an overseas trip. That stat has more than tripled over the last decade. Generous spending by Chinese tourists is well known and has changed Korea’s tourism balance. Korea earned a record-high $1.62 billion in July in tourism revenues. Koreans also spent the largest amount ever, $1.82 billion, on their overseas forays. Still the deficit was a 13-year low - all thanks to Chinese tourists, who accounted for 42 percent of total foreign visitors to Korea. That’s triple the number of Japanese tourists.

Some numbers we have described represent a threat and others a boon to the Korean economy. The difference from the past is in the scale. The amounts the Chinese spend and invest in Korea are no longer negligible. The bigger their stakes here, the greater their influence will be. Corporate rankings may hinge on the Chinese capital. Some companies may live on Chinese money. One of these days, we may be no different from North Koreans with their dependence on China.

A businessman told me a few years ago that he fears the Chinese. “We may be the only generation in 5,000 years of mutual history who received foot massages from the Chinese.” Whether his dread comes true depends on how we deal with the numbers dealt to us.