Apple catches up with phablet and a wearable

Apple catches up with phablet and a wearable 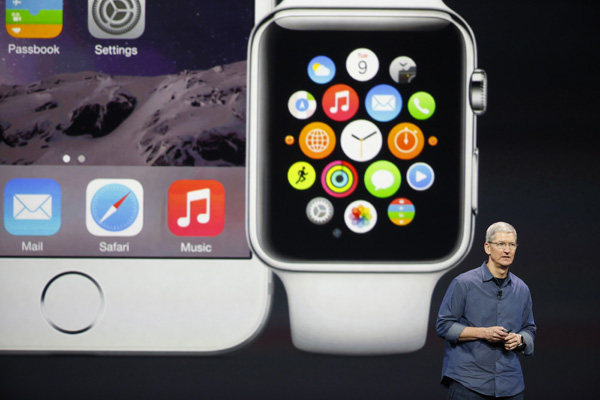 Apple CEO Tim Cook speaks during an Apple event announcing the iPhone 6 and the Apple Watch at the Flint Center in Cupertino, California, on Tuesday. [REUTERS/NEWS1]

Apple unveiled its latest iPhone, its first phablet and its first wearable device, following in the footsteps of Samsung Electronics and accelerating the smart device race.

The iPhone 6 and Apple’s first phablet, which the company calls the iPhone 6 Plus, fulfilled earlier expectations that the U.S. smartphone giant was ditching its own philosophy of a four-inch or smaller smartphone screen due to shifting consumer preferences. The iPhone 6 will have a 4.7-inch screen and the phablet’s will be 5.5 inches.

But the product that stood out at the presentation held Tuesday in Cupertino, California, was the company’s first smartwatch, named the Apple Watch.

Apple Korea said the products will come to the Korean market soon but didn’t give a date.

One of the features that Apple CEO Tim Cook stressed during the presentation was the smartwatch’s fitness and health management system, which was emphasized in a video shown during the event.

“It’s a new, intimate way to communicate from your wrist and a comprehensive health and fitness device,” Cook said during the presentation.

The Apple Watch is equipped with a heart rate monitor and it also monitors the calories burned, the intensity of a workout and measures activity at work or at home including how long you’ve been sitting and how often you move around within a confined space.

“[It’s] designed to help anyone who wears it live a healthier life by being more active,” said Jay Blahnik in a video.

Blahnik, a fitness guru and adviser on the development of Nike’s FuelBand, joined Apple a year ago.

The Fit - unlike the Apple Watch or Samsung’s own smartwatch the Galaxy Gear - has a rectangular frame that looks more like a wristband with a 1.84-inch curved Super Amoled display.

It not only monitors one’s heart rate but also the intensity of a workout and calorie intake. As with the Apple Watch, the data is transferred to a compatible smartphone, which can be monitored and analyzed for health and fitness management.

The Fit can be immersed in water deeper than one meter (3.2 feet) for 30 minutes.

However, the operating system is not open to third-party apps, unlike the Gear or Apple Watch.

The Gear 2 also offers a similar fitness-tracking system. According to the company, the Gear 2 Neo tracks a person’s fitness status in real time with a built-in heart rate sensor and a pedometer.

The digital fitness tracker market has been growing exponentially in recent years.

According to the Consumer Electronics Association (CEA) in January, the market for wearable fitness devices in 2013 grew 13 percent year-on-year. This is a sharp rise from the 3 percent increase seen in 2012.

The market for wearable fitness devices is an estimated $238 million, with Fitbit, Nike and Jawbone accounting for 97 percent.

“CEA projects that the market for dedicated wearable fitness devices like body monitors and pedometers will continue to expand for the foreseeable future as more consumers become aware of these devices and an array of new products enter the market,” said Kevin Tillmann, a senior research analyst at CEA.

However, with Nike pulling out from making the devices and focusing more on app and software development, market dominance by Apple and Samsung is expected to deepen.

The latest iPhones announced Tuesday will be available from all three of Korea’s major telecommunication companies. For the first time, LG U+, the nation’s third-largest mobile carrier, has joined SK Telecom and KT in retailing the latest iPhone 6 and iPhone 6 Plus.

Until now, the iPhone wasn’t available at LG U+ as Apple’s smartphone only used 3G networks for its voice calls, whereas LG U+ only has LTE networks. KT was the sole provider of iPhones when the smartphone first landed in Korea in 2009. SK Telecom joined in March 2011.

The availability of the iPhone 6 and iPhone 6 Plus is expected to help Apple expand its market share in Korea, where it falls far behind Korean smartphones.

According to the market research firm Counter Point, Samsung Electronics controlled 59 percent of the local smartphone market as of July, followed by LG Electronics with 29 percent and Pantech with 7 percent. Apple’s share in Korea only accounted for 5 percent.

“For iPhone users, LG U+ can be a great option if the carrier provides more discount benefits,” said a local smartphone retailer. “And for LG U+, it could expand its market share by attracting iPhone users.”

Others, however, were doubtful that the latest iPhones will change the game in Korea.

“It’s possible that the iPhone’s market share could grow,” said an analyst at Eugene Investment & Securities. “However, as Apple’s market share is much smaller compared to Samsung, it is not likely that it will threaten to overtake Samsung’s dominance.”