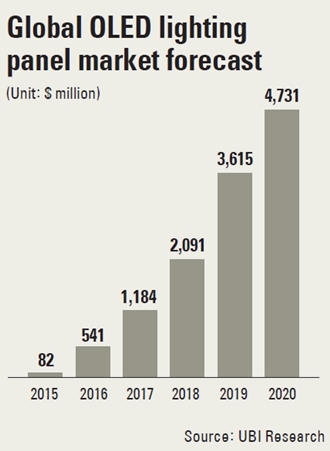 The company under LG Group said its OLED panel has a luminous efficacy, a measure of how well a source produces visible light, of 100 lumens per watt and a life of 40,000 hours, nearly double that of competitors.

Unlike LED light panels, OLED panels don’t require additional parts like light-guiding plates or radiant heat panels, reducing their cost and making them easier to install. In addition, an OLED panel is one-tenth the thickness and about one-fifth the weight of an LED light, according to LG Chem.

The company entered the OLED lighting panel business in 2008 and began mass production in 2010 at its plant in Ochang, North Chungcheong.

In order to promote OLED light, LG Chem said it has been trying to develop affordable, consumer-friendly products.

“OLED lighting has many advantages like the quality of light and easy installation, so its market potential is big,” said LG Chem President Park Young-ki, who heads the company’s electronic materials business. “As we secured industry-leading technology, we will continuously make investments for R&D and mass production.”

According to a report from a local researcher, the global OLED panel market is expected to boom from next year and reach $4.7 billion in 2020 with an average annual growth of 100 percent.

LG Chem said it will target the world’s two largest lighting markets - North America and Europe - with its new product.

So far, it has secured more than 50 customers, including Acuity Brands, the largest lighting company in the United States.

The company is also targeting automobiles, which account for about 20 percent of the total lighting market.

“OLED light is now getting attention in the automobile lighting market because of its design flexibility,” said an LG Chem spokesman. “We are currently developing OLED lighting panels for rear lamps with global automakers, aiming to mass produce from 2017.”