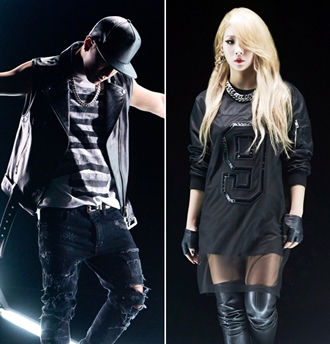 YG’s fashion project is a partnership with Cheil Industries, which has a number of brands such as 8Seconds and Beanpole. The companies formed the joint venture Natural9 in June 2012 with the aim to make NONAGON a line for international markets.

NONAGON clothes are fierce and fiery, and many items have studs and black leather, like the outfits that YG artists 2NE1 and Big Bang wear on stage.

Cheil and YG said in a statement yesterday that the brand will open pop-up shops at home and abroad, which will be open for less than a month.

The first shop opened its doors yesterday at Galleria Department Store in Cheongdam-dong, southern Seoul, where the clothing will be on sale until Sept. 25.

Other pop-up stores will open at the Milan and Cheongdam-dong branches of 10 Corso Como, and the Hong Kong and Shanghai units of the retailer I.T. Those shops will also be open until Sept. 25.

The statement said that the brand is aimed at young people and the stores will also likely appeal to K-pop fans. Tae-yang and CL, members of Big Bang and 2NE1, are the main models for NONAGON.

According to Natural9, the line is based on street culture and uses fabrics like jersey and leather to give the clothes an element of toughness. The main items include a bomber jacket, short dresses and snapbacks.

“Through the project, we can combine Cheil’s expertise in the fashion industry with YG’s broader appeal and marketing acumen,” said YG CEO Yang Min-suk, who is also in charge of Natural9. “We will target young people who are interested in pop culture.”