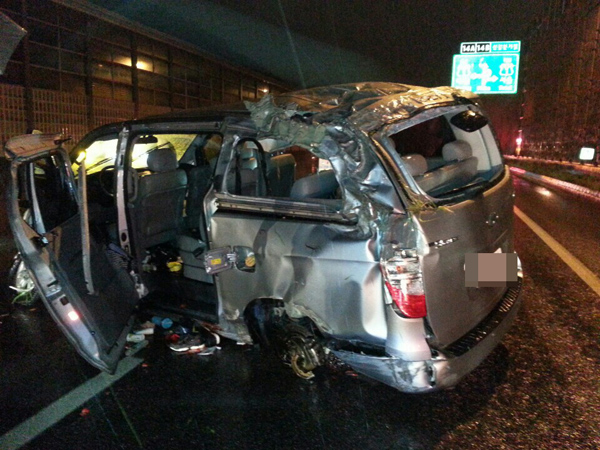 The van carrying the girl group Ladies’ Code from Daegu to Seoul on Sept. 3 was completely crushed after it crashed into a wall on Youngdong Highway. The air bags did not deploy. Provided by Gyeonggi Fire Service


A tragic car accident last week that killed two members of the girl group Ladies’ Code shocked the band’s fans and has shone a light on the hazards of defective air bags, which elevate the risk of injury and death.

Koh Eun-bi died at around 1:30 a.m. on Sept. 4, after the driver of the van carrying the group lost control of the vehicle and crashed into a guard rail on Youngdong Highway, near Yongin, Gyeonggi, police said.

Koh, known by her stage name EunB, was 21. She died at the scene.

Fellow musician Kwon Ri-sae, 23, known by her stage name RiSe, also died Sunday from injuries she sustained in the accident. She was listed in critical condition when she was transported to the hospital last week.

The van carrying the girls from Daegu to Seoul was completely crushed, and the air bags on the driver-side and passenger’s seat did not deploy.

All five of the girls in the group were sitting in the back seat of the vehicle. And while Koh and Kwon’s deaths were unrelated to the faulty air bags, the accident was high-profile enough to reignite debate over safety checks on vehicles and defective parts.

The police are looking into whether the vehicle was defective and are also working to determine whether the driver, only known by his surname Park, was negligent.

According to Saenuri Party Rep. Lee Woo-hyun, the Korea Consumer Agency (KCA) has received 925 reports related to defective air bags from 2010 to June this year. Of the total, nonfunctional air bags accounted for 725, or 78.4 percent, while 5.5 percent abruptly inflated without impact and in 4.9 percent of instances, air bag warning lights were on, indicating a problem.

According to the Ministry of Land, Infrastructure and Transport, the number of car accidents in which air bags did not deploy is also increasing, from 19 in 2012 to 33 in 2013, and 38 as of August this year.

Lee blamed the Korea Transportation Safety Authority (KTSA), in charge of initial investigation into reports on defective air bags, for the rising number of such cases.

“The KTSA only conducted its investigation on the phone and sent its men to only four out of the 925 cases,” Lee said. “They are not doing their job properly when defective air bags increasingly cause injury, even fatalities.”

An official at the KTSA defended the organization, saying it had organized a task force in April to look into cases in which air bags did not appear to function properly. “But we have encountered difficulties because there is no international standard that clearly states conditions for air bag inflation,” the official said.

Seo Jae-ho, a member of the boy group Wanted, died in August 2004 in a similar car accident when he was heading from Busan to Gangneung, Gangwon.