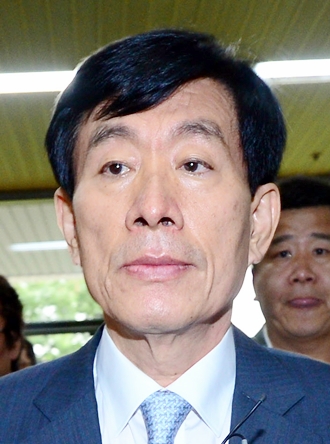 The nation’s former spy chief was convicted of breaching his duty to be politically neutral when he ordered agents to operate a cyber campaign on the eve of the 2012 presidential election.

A local court, however, acquitted Won Sei-hoon of violating the election law. Won headed the National Intelligence Service from 2009 to 2013.

Won, who was appointed by the Lee Myung-bak administration, was tried on charges that his agency interfered in the 2012 presidential election by operating an online political campaign against opposition candidate Moon Jae-in.

The Seoul Central District Court yesterday convicted Won of violating the law governing the National Intelligence Service. The court, however, said he did not violate the election law because the campaign was a routine activity of the agency, not a premeditated operation with the intention to influence the presidential election.

Days before the Dec. 19, 2012, presidential election, the Democratic Party, predecessor of the opposition New Politics Alliance for Democracy, claimed that government offices, including the National Intelligence Service, ran a cyber smear campaign against its candidate, Moon.

Police fueled the controversy by announcing the results of its initial probe and clearing the spy agency on Dec. 16, three days before the election.

While prosecutors argued that Won should be punished with a four-year prison term, the Seoul Central District Court said yesterday he should be imprisoned for two years and six months. But the punishment will be suspended over a four-year probation period. Only two days ago, Won was released from prison after completing a 14-month sentence for graft.

Other NIS officials tried in the same case were also convicted of violating the law governing the agency; the court gave them suspended sentences.

The court said yesterday that the NIS agents violated the law governing the agency by systematically making Internet postings and tweeted whether the topic was related to the presidential election or not. The prosecution had argued that the agents of the psychological warfare unit of the agency created 780,000 Twitter messages with political content at the order of Won, calling it a crime against the Constitution.

The court also ruled yesterday that the agents acted on the orders of Won. Although Won did not specifically issued an order to the psychological warfare unit to operate a cyber smear campaign, what Won had stressed throughout his term and a summary of his messages provided to the team amounted to an administrative order, the court said.

“Although Won was only briefed about the psychological warfare unit’s operation and did not know the specifics of their activities, they have a clear relationship as accomplices,” the court said.

The court, however, rejected the prosecution’s argument that Won violated the election law by ordering a systematic operation to influence domestic politics.

“No evidence was presented that Won made a direct order to the National Intelligence Service agents to influence the presidential election,” the court said.

It also said the team’s operation was part of the agency’s routine activities.

The court said Won had a heavy responsibility as head of the NIS to protect the agency’s political neutrality and prevent its agents from meddling in politics. He, therefore, deserves severe criticism for promoting government policies while trying to smear opposition political parties, the court said.

The court, then, noted that the NIS’s cyber operations were originally designed to counter North Korea’s online smear campaigns, and they started before Won became the chief of the agency.

“Won did not plan the operation with a purpose and he merely followed past practice,” the court said.

The opposition New Politics Alliance for Democracy denounced the ruling.

“It doesn’t make sense that National Intelligence Service agents violated the law governing the agency but did not violate the election law,” said Kim Young-keun, spokesman of the party.