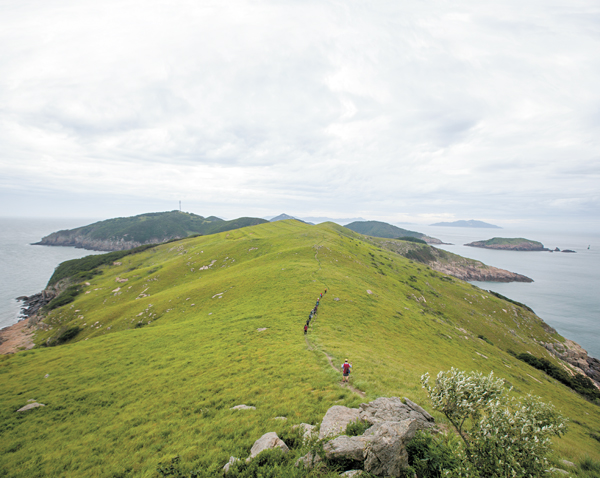 Ant Hill on Guleop Island is called a “holy land” among campers who visit the remote island every weekend to savor a night of untouched nature. By Ahn Sung-sik

Guleop Island, or Guleopdo, better known as a “holy land” among local campers, is located roughly 85 kilometers (53 miles) off the coast of Incheon.

Animal-shaped natural cliffs, panoramic views of the shimmering ocean and yards of emerald-green grass are just a few of the appealing factors the untouched paradise has to offer.

Only nine households are based on the 1.7-square-kilometer island, but more than 100 visitors make a stop there each weekend because the locale is slowly picking up momentum as a popular place to camp.

Kim, head of a camping club called the Weathermaster Laboratory, escorted eight other club members and three JoongAng Ilbo reporters on a journey to the mystical island from Aug. 9 to 10.

In a nutshell, Guleop Island is beautiful. 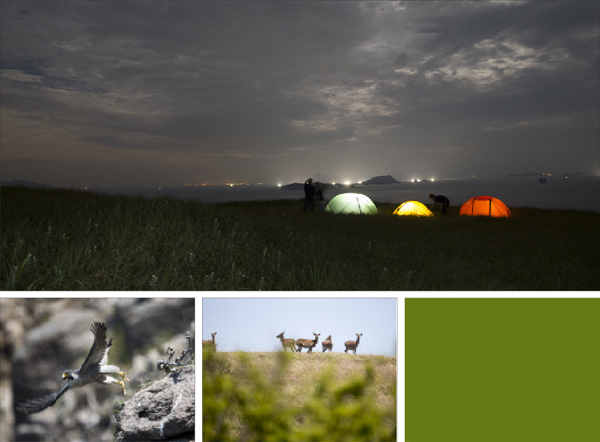 Moon was apparently worried about CJ Group’s earlier attempts to turn the island into a luxurious tourist complex complete with a golf course and a hotel after the conglomerate won ownership from the Incheon city government in 2006.

The plans foundered last month when CJ announced it would not construct the golf course.

Perhaps it was obvious from day one that the company would succumb to social outcry about prioritizing the environment over industrial development. But what we realized through this trip - well, not until after the trip - is that CJ might have had a very good reason to renovate Guleopdo Island: it just seems too good to leave it as it is.

Our exploration of the island kicked off in the morning of one fine summer day at Incheon Port. We had to transfer boats midway at Deokjeok Island, which is 75 kilometers southwest of our departure point.

A map shows the location of Guleop Island colored in black; the Elephant Rock

When we switched boats, we realized we wouldn’t be pioneering in a forbidden land in the middle of the West Sea. The stowage was lined with fully-loaded backpacks of multiple hues, which seemed to surpass 100 at a glance.

After three hours of sailing, we finally set foot on Guleop Island.

Its size was quite small, less than a thousandth of Jeju Island, but it had enough enjoyable factors to make our trip unforgettable.

Two sandy beaches located in the middle of the island were surrounded by hills and mountains more than 100 meters high, like Mount Deokmul (138 meters), Mount Yeonpyeong (128 meters) and Ant Hill (117 meters).

Rigged cliffs full of grandeur, such as Elephant Rock, which interestingly portrays the horn and front leg of the animal it’s named after, spanned the coastline.

Arguments vary on the precise origin of the island’s name, but an article from the JoongAng Ilbo in 1923 hints that Guleop Island was called Guroeup during that time, which literally means an island where seagulls and white herons cry.

Guleopdo has managed to live up to its original title as seagulls and herons were easy to spot during our visit. But we knew for sure from days of rummaging through news reports and research papers before hopping onboard that we were walking on a piece of land with unparalleled environmental significance.

Two decades ago in 1994, when the government announced measures to build a radioactive waste disposal facility on the island, environmentalists convened to convince public officials that the very decision would prove to be a fatal mistake.

And the results were amazing.

A series of probes revealed that Guleop Island was home to dozens of natural monuments and endangered wild species like oyster catchers.

And in terms of geology, scholars argued that the island, which was formed by a volcanic eruption some 90 million years ago, held tremendous importance in further developing the field of academic research, for a large portion of it remained untouched.

Cornered by ceaseless claims about why the facility shouldn’t be built on the island, the government announced in 1995 that it would not carry through its plans to turn the area into a wasteland.

Perhaps CJ thought it could take a second chance at “developing” the island when it unleashed its own blueprints in 2006, after purchasing a whopping 98.5 percent of the island.

The company vowed to invest as much as 391 billion won ($377 million) in constructing a mega-size tourist complex there, but once again had to face the angry environmentalists - and ultimately lose to their arguments. 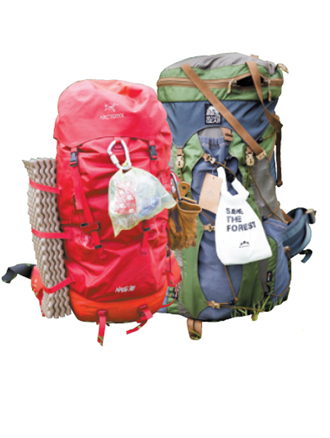 Other than the tourists who visit the island every weekend, there are 29 permanent residents, who mostly live by raising livestock and farming peanuts. With the number of visitors rising each month, opening lodging has become another business option.

But a look into the past shows that the island is completely different to how it is now.

Nearly a century ago, during the 1910s through the 1920s, Guleop Island was, in fact, the country’s richest croaker fishing ground, records say.

As many as 500 people relying on the fishery business used to call the island home.

But when a lethal typhoon took the lives of about 1,000 residents in 1923, the prosperous business vanished forever.

Remnants of the past can be found in the northern part of the island, where fish markets were seasonally opened, but fish markets have now been replaced by campers who drop by to enjoy a romantic night in the island’s epic natural beauty.

Campers refer to Ant Hill as a “holy land,” and we instantly learned why when we laid our eyes on the flat hill flanked by a panoramic view of the ocean that seemed to reach eternity - wherever that is.

At night, dozens of tents were set up along the hill’s ridge while deer roamed around.

When the night settled in, a full moon peeked through the thin clouds, pouring down a cascade of light that illuminated the entire hill.

As we lay our heads down after a long day away from home, we slowly fell asleep to the orchestral humming of insects and the gentle whispers of the wind.

Note that the three-hour voyage to Guleop Island lasts a total of five hours during even-numbered dates, because boats leaving from Incheon Port tour around several islands before embarking on Deokjeok Island. Round-trip tickets for adults from Incheon to Deokjeok Island are 46,000 won; those from Deokjeok to Guleop cost 15,000 won.