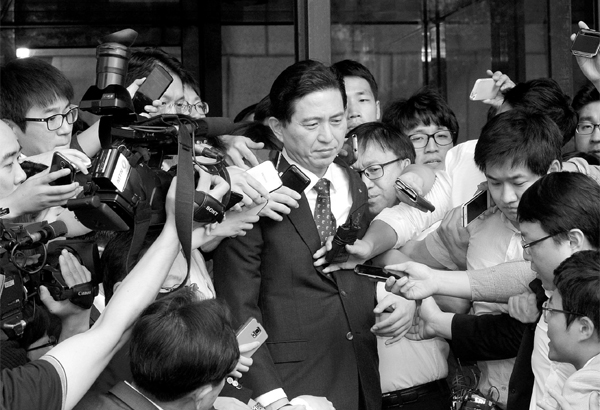 After serving the suspension, Lim will be allowed to finish his term, which expires in 2016. At that time, he will be prohibited from working in the financial industry for three to five years.

“The KB Financial Group chairman was seriously negligent about his supervisory responsibility and severely damaged the group’s soundness,” the commission said in a press release.

The Financial Supervisory Service (FSS) earlier recommended that Lim be allowed to complete his term with no suspension.

All nine committee members of the FSC approved the punishment for Lim.

“As the chief of the group, he should take responsibility for closely monitoring and supervising its subsidiary bank’s computing system change,” the statement said. “The chairman didn’t carefully review related costs and risks of the project despite repeated internal reports.”

The commission also said the group chairman was involved in the bank’s decision, which resulted in a distortion and that the bank’s reports to the boardroom were false, a serious violation.

“The KB scandal was sparked due to the absence of an adequate internal control system,” said FSC Chairman Shin Je-yoon. “I will meet with the KB board chairman to discuss early normalization of the group.”

Lim said in a statement that he cannot accept the FSC’s decision.

“I will seek every possible measure, including legal action, to clarify the truth from now on,” he said. “Even though it will be a tough journey, this is not subject to compromise.”

Lim has aggressively asserted his innocence, claiming the earlier penalty proposed by the FSS was unreasonable.

He even held a press conference immediately after the Chuseok holidays ended Wednesday.

Last week, FSS Governor Choi Soo-hyun hinted at the severity of the penalty. “During the process of switching its network system, the top management of the holding company and the bank committed wrongdoings as serious as crimes,” he said.

The feud was sparked in April when the bank’s CEO requested an investigation into the computer system switch from IBM to Unix, citing manipulation of data by the group chairman used in the decision-making process.

KB Financial Group has suffered a long history of top management being forced to resign early under penalties imposed by financial authorities.

Hwang Young-key, who became the financial group’s first chairman in September 2008, was forced to retire just a year after he took the position because he was slapped with a penalty that suspended him from working for three months after a bad investment decision in 2005 resulted in massive layoffs.

Regarding yesterday’s decision, the Korean Financial Industry Union expressed its support for the FSC’s punishment.

“We welcome the right punishment for a power struggle that caused a severe vacancy in top management of the group,” the union said in a statement. “We demand that Lim step down immediately. His pursuit of power expansion put the whole group into confusion.”