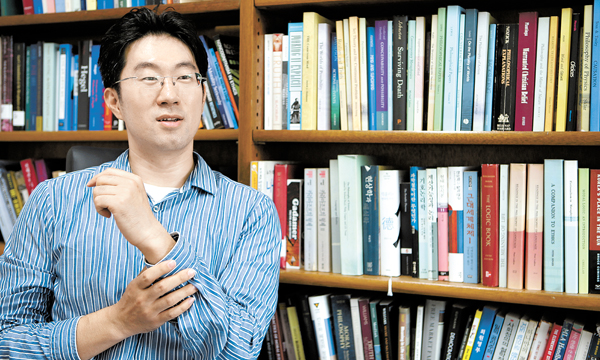 Kim Hyun-seop, philosophy professor at Seoul National University, talks about his decision to quit the judge and to study philosophy. By Kim Choon-sik

Kim Hyun-seop passed the bar at age 21 and was second in his class at the Judicial Research and Training Institute. But after being hired as a judge at a regional court in Seoul, Kim quit within less than a year and left for the United States to study philosophy.

In March, the 36-year-old Kim became a professor at Seoul National University, teaching philosophy and ethics.

But the question remains as to why Kim gave up a job that guaranteed a solid, lifelong career for a challenge that was less secure. Why take the hard road?

The answer is simple: “Because I like philosophy,” Kim said.

The former judge was a model student. After graduating from Daewon Foreign Language High School and Seoul National University’s law school, he could have gone the full nine yards in a successful legal career.

But in 2001, while still attending the Judicial Research and Training Institute, he applied for postgraduate study in philosophy at his alma mater.

Q. Why did you take an interest in philosophy?

A. I went through a mentally difficult adolescence. In middle school I read Stephen Hawking’s “A Brief History of Time,” but I was so shocked I ripped the book apart. I couldn’t accept that there was nothing but a physical formation at the end of the universe and humanity. [The book] assumes there is nothing out there to give meaning to god or life, and that there is no meaning or direction in this limited life. So I started to take an interest in philosophical questions like how one should live life.

So why did you take the bar?

It was natural to take the bar exam since I attended law school. My studies during that time became a huge asset because law is the accumulation of wisdom. It helps you to understand how relationships work and how to regulate society.

Being a judge is a job everyone wants. Do you have any regrets about quitting?

At the time my desire to study philosophy was so strong, I didn’t think much about anything else. Looking back, I think I was too naive. I didn’t even think about whether I could land a job after my studies in the United States. It was possible because I don’t have a family of my own to support.

For some people it may not be easy to understand that your urge to study was greater than securing a solid job.

When studying law I tried to think about fundamental problems with cases or legal provisions. During my college years I told my legal philosophy professor I understood that the law is set to keep people dignified, but that I didn’t understand the reason why people need to be dignified. The professor told me it would be better for me to study philosophy.

But studying philosophy is losing its appeal.

I think the need for philosophy is growing more than ever. More people are thinking about what they really want and how to live a meaningful life. The problem is that many people are so busy, they don’t have time to ponder that thought for very long.

It seems like there are more people who think about how to make money than how to live their life.

Are there people who think wealth itself is worthy?

Isn’t that what many people think?

When people are asked why they need money, most would say because if they have it they will have more freedom. If so, the most important value is not money but freedom. They wouldn’t want more money than the amount they need to be free. Then, when people are asked what they would do with the freedom, they answer that they would do anything that’s fun. If so, we could say the purpose of making money, in the end, is to find something you want to do and to enjoy it.

Is studying philosophy what makes you happy?

While I was studying abroad I was singing and dancing every day because I could study what I wanted with excellent teachers as much as I wanted. I thought nothing could be better. Among philosophy, the study of ethics, which I am currently focusing on, is my favorite. It’s a study that brings up questions about how a person should live. It’s not easy to find what one really wants. I’m lucky in the sense that I found what I really wanted.

For the people around me who tell me they don’t really know what they want, I advise them to pick up anything they are good at. Things get fun when you are good at something and when it’s fun, it lasts a long time.

Students today seem like they don’t have much time to find what they are good at or what they want to do.

It’s sad. I think for such a reason it is important to try everything out. It will be too late when they start thinking about what they really want, or want to do, after they pay all of their attention to preparing for the college entrance exam.