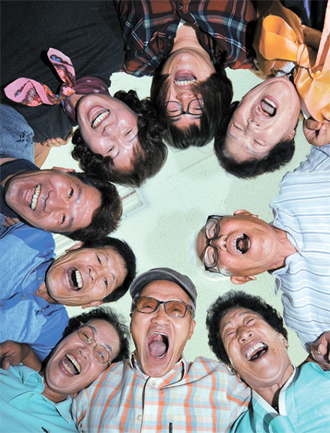 Six seniors over 70 years old met to practice “Baekgok Arirang” at a cultural center on Sept. 1 in a rural town with a population of 252 in Jincheon County, North Chungcheong.

“You should have said the lines while hitting the ground,” one of the seniors said.

“I knew the lines until the other night, but I just forgot,” the other replied.

The six are members of the Senior Theater Group, which launched in June. They usually gather together three times a week for practice - unless they have urgent chores to do.

The Senior Theater Group formed in June after a music concert was held in the town.

At the event, Chae Hui-jeong, the concert organizer, asked Yu Bang-yeol, 82, if he wanted to perform in a play.

Yu had entered an arts college in hopes of becoming an actor, but he quit because his relatives opposed the idea. His family wouldn’t let their only third-generation son become a “clown,” Yu said.

“The offer was a good chance for me to realize my dream,” Yu explained.

Yu gathered together the fellow seniors in town who he thought might have a talent for acting.

“I’ve worked at a farm since I was married at 20 years old,” said Jeon Mi-ja, 73, a member of the Senior Theater Group. “I feel like I’ve become mentally and physically younger since I started to practice the play.”

Another member, Kim Hong-tae, 74, used to dream of being Charlie Chaplin while he worked as a cultural property repairman.

A play called “Compensation” was chosen for the seniors. Its title was changed to “Baekgok Arirang,” reflecting the name of the town, Baekgok.

The plot is about a family fighting over 1 million won ($966) given as compensation after the eldest son dies.

“I’ve read this over and over, but my mind goes blank as soon as it leaves my hands,” one of the actors said while holding a crumpled 13-page script.

Samuel Hayter joined the Senior Theater Group as its director. Born in South Korea, Hayter was once a voice actor. He flew to Canada in 2001 and led a theater group in a small town in the country.

Hayter later settled in Jincheon County, hoping to organize a local theater group in South Korea. It was Chae who introduced him to the seniors.

After a casting session in June, the group members started to read their scripts in July.

Vocalization practice was especially a headache.

Another problem the members could not overcome, which turned out to be a unique aspect of the play, was the Chungcheong dialect.

The play was originally written in standard Korean, the modern speech of Seoul. But adapting to the capital’s dialect was difficult for the members, so they stuck to using speech from Chungcheong.

The dialect is notable for its slow, mild enunciation.

“The way they speak is so slow that we had to extend the 40-minute play to an hourlong one,” said Chae.

“At first, I thought acting was not going to be so difficult if I practiced enough,” said Lee Li-ho, 74.

“But as the play approaches in two months, my heart has started to pound.”

The Senior Theater Group will present its first play on Nov. 1 at Baekgok Elementary school’s auditorium.