NPAD’s Park shoots herself in the foot once again

NPAD’s Park shoots herself in the foot once again 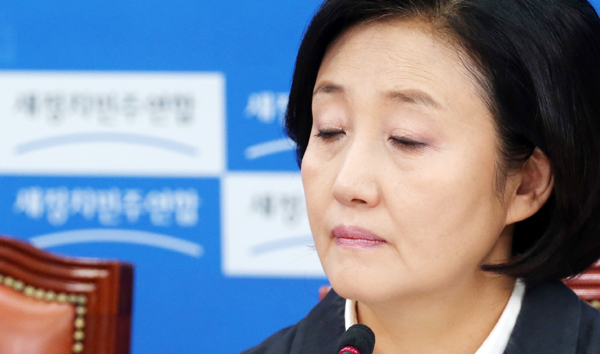 Park Young-sun, the interim leader of the main opposition New Politics Alliance for Democracy, presides over a party leadership meeting yesterday at the National Assembly. By Kim Hyung-soo

The opposition New Politics Alliance for Democracy faces yet another internal schism over its leader’s appointment of two heads of an emergency committee - including one who worked on the most recent presidential campaign of the ruling Saenuri Party.

On Thursday, it was reported that interim party chief Park Young-sun had appointed two men as co-leaders of an emergency committee to lead the party until it holds a party convention early next year to elect a party leader and supreme council members. One was Ahn Kyong-whan, a renowned professor emeritus of Seoul National University.

But the other was Lee Sang-don, a professor emeritus of Chung-Ang University and a former member of the ruling Saenuri Party who worked for a reform committee prior to both the April 2012 general election and the Park Geun-hye presidential campaign later that year.

Despite his participation in that campaign, the former political science professor has been critical of the Park administration and resigned from the party last month.

After news reports reached the National Assembly, nearly half of the party’s 130 lawmakers expressed their disapproval of Park’s decision.

“This is not a sign of change for the party but a sign of betrayal and humiliation for the people who voted for us in the 2012 presidential election,” said a furious Rep. Jung Chung-rae of the NPAD during a press briefing yesterday.

As of press time, it wasn’t clear if Professor Lee had turned down Park’s nomination to the committee, but he indicated he would not be able to accept the post unless there was a consensus within the party to accept him.

It was expected that Lee would try to move the largest opposition party more to the center and put more efforts into reaching compromises with the ruling Saenuri.

Veteran lawmaker Park Jie-won, who was the presidential chief of staff in the Kim Dae-jung government, also voiced his opposition to the appointment.

“Even if the party needs a blood transfusion, the blood type has to be the same,” Park said in a radio interview with SBS yesterday.

“The mood here is that considering the party’s history and identity, it is a compromising of our pride [to accept Lee].”

As the brouhaha grew, Choi of SNU said he was turning down the appointment, too.

“I already made my contribution [to the NPAD] in the 2012 presidential election and I am very aware of the limit in my ability [as a political player],” said the former head of the National Human Rights Commission yesterday.

Widely revered in liberal circles, Choi is known for his expertise in human rights law and his opposition to the National Security Law.

The fact that Park Young-sun tried to have the two men as co-chairmen - one from the conservative side and one from the liberal side - has spawned speculation that she was trying to find a new balance for the ideological leaning of the party, which has been suffering from constant internal ruptures and a continuing drop in popularity. It also suffered a major defeat in the July 30 by-elections.