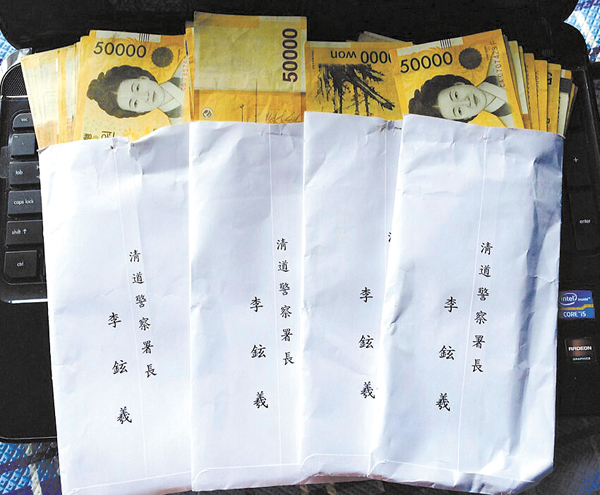 The National Police Agency dismissed the Cheongdo police chief after allegations that he handed out envelopes filled with 1 million won to 5 million won each (about $1,000 to $5,000) to local residents protesting the government’s plan to build high-voltage power line pylons in Cheongdo County, North Gyeongsang.

All of the women have been protesting the construction of the pylons and the running of the power lines through their rural area, which they fear will affect their health.

The report by the authorities fueled speculation that the police chief was trying to bribe the elderly residents to stop the protests.

According to the internal probe on Lee, he met with the elderly women before Chuseok, telling them to buy some painkillers to relieve stress caused by a recent 50-day protest.

The women replied that they didn’t have the money to do so.

After the encounter, Lee contacted the North Gyeongsang branch of the Korea Electric Power Corporation (Kepco) and described the encounter. The electricity operator handed over 16 million won to the police station in 50,000 won notes, which was later put in envelopes for the six women.

“I understand Kepco gave the money as compensation for the people for the rally,” said a police official speaking on the condition of anonymity.

It was also revealed that two women returned the money. The other four women, who received 2 million won each, kept it.

The anti-voltage protest committee claims that the money was not intended to compensate anyone but was aimed at dividing the protest movement.

Another allegation over the money scandal emerged yesterday. The dismissed police chief was quoted by the Munhwa Ilbo yesterday as saying that one of the protesters asked for the money for medical treatment, saying Kepco had refused to compensate her.

“I received the money from Kepco and gave it to her through a police station official,” said Lee.

The protest committee refuted Lee’s claim and alleged that none of the six ladies had demanded any money.

The National Police Agency dispatched an investigation team to Cheongdo to find out the facts behind the case.