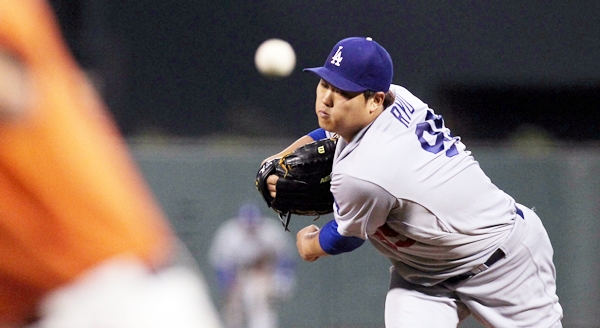 Ryu Hyun-jin of the Los Angeles Dodgers will have an MRI on his ailing left shoulder, which forced him to leave Friday’s game against the San Francisco Giants after only one inning.

The Dodger left-hander clearly wasn’t himself, giving up four runs in the first to pick up his seventh loss of the season in a 9-0 Giants victory.

The 27-year-old complained of tightness and pain in his left shoulder, saying later the injury felt similar to the one that sent him to the disabled list for 24 days in May.

Ryu met with the team physician Neal Elattrache in San Francisco, but the Dodgers decided to have him undergo the MRI in Los Angeles.

If Ryu is sidelined as long as he was earlier, he could be back for the Dodgers’ season-ending three-game series against the Colorado Rockies, or he could forego the rest of the regular season to return for the playoffs in October.

Before the Dodgers’ game Saturday, Manager Don Mattingly said he wasn’t sure whether Ryu will miss his next scheduled start against the Rockies on Wednesday, but Carlos Frias will fill in for him if he does.

“I’m fine,” Ryu told Korean reporters in the clubhouse at AT&T Park on Saturday, then left without answering any further questions.

“I think he [Ryu] really needs to take this very seriously,” said baseball analyst Kim In-sik, who managed Ryu with the Hanwha Eagles years ago. “I think the injury is in the back of his shoulder, which can be painful until it is completely healed. I know the Dodgers are in the middle of a battle with the Giants to win the National League West Division, but they need to be cautious with him. They don’t want to see him on the operating table.”

Others speculate adjustments made by Ryu may have contributed to the problem.

“Ryu is generally known as a fastball-changeup pitcher, but he adjusted his delivery to have stronger sliders in the middle of the season,” said MBC Sports baseball analyst Cha Myung-suk. “That means he started using muscles that he hasn’t used that often, a typical way for an athlete to get hurt.”

Meanwhile, the Dodgers won the second game of their series with the Giants on Saturday by crushing their rivals 17-0. Starting pitcher Zack Greinke had six scoreless innings for the Dodgers and helped himself for his 15th win of the season with a two-run homer and a double. Copying the Giants’ four-run first inning from Friday, the Dodgers added another four in the second to jump out to an 8-0 lead.