Korea gets off on the right foot

Korea gets off on the right foot 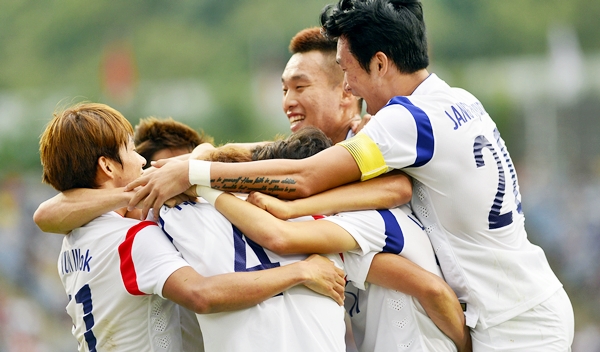 Korea got off to a good start in the 2014 Incheon Asian Games football tournament by crushing Malaysia 3-0 in a Group A match.

The games officially begin after Friday’s opening ceremony, but the football started yesterday.

In the Group A match against Malaysia at Munhak Stadium in Incheon, the Korean national U-23 team led by Coach Lee Kwang-jong began its quest to win a gold medal for the first time in 28 years.

But several missed scoring opportunities against Malaysia made it clear the team will need to improve the accuracy of its shooting and passing to realize that quest. Of 15 shots, five were on target.

As soon as the referee blew the whistle to start the match, most Malaysians stayed on their side to build a defense bloc, a typical strategy for a team facing a much stronger opponent. Korea controlled the ball for 71 percent of the match, aggressively pressing Malaysia. Striker Kim often threatened with headers, and speedy attacking midfielders such as Yun consistently penetrated the opponent’s area to break their off-side traps. The first goal came in the 26th minute. Defender Rim Chang-woo blasted a header into Malaysia’s net on a corner kick, as Malaysian players focused on defending Kim Shin-wook.

Wrapping up the first half with a 1-0 lead, the young Taegeuk Warriors never stopped looking for more, replacing midfielder An Yong-woo with Kim Yong-gook, a better passer.

As Malaysia focused on not allowing more goals, five or six players often stayed inside the penalty box, but Korea’s best striker, Kim Shin-wook, scored the team’s second goal by putting the ball into the lower-left corner of the net with his left foot after receiving the ball from Kim Seung-dae, who would score the team’s third goal four minutes later.

“It was a good start,” Coach Lee said after the match. “Players such as Kim Seung-dae and Kim Shin-wook did exactly what they had to do on the field. There are some things that we need to work on, like improving passing accuracy, but I expect it to get better later in the tournament. We will now focus on the next match [against Saudi Arabia].”

In another Group A match held earlier the day at the same venue, Saudi Arabia, a competitor for Korea to win the group, defeated Laos 3-0. Saudi Arabia had a hard time scoring as Laos - like Malaysia - focused on defense, but broke through on a penalty kick in the 75th minute. They then put two more on the board in the 87th and 90th minutes to claim their first victory of the tournament.

Korea plays Saudi Arabia at Ansan, Gyeonggi, on Wednesday in a match that many expect will determine the Group A winner. The two are tied for first with three points.

In the Group C opener, Tajikistan beat Singapore, 1-0, in Ansan, while Iraq defeated Nepal, 4-0, in Group D match at Incheon.