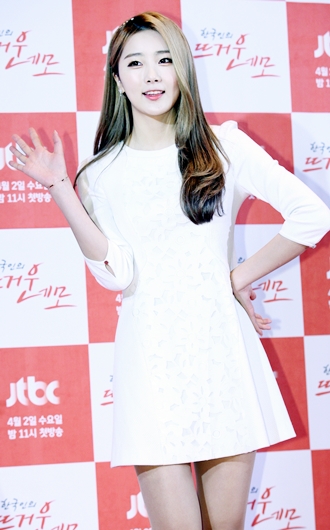 Subin, from the girl group Dal Shabet made her return to music yesterday, just four months after she was involved in a car accident.

Along with Dal Shabet’s five other members, the young singer took to the stage yesterday to open the 2014 Let’s Run PARK Open Tournament, a horse-racing competition that was held at the Seoul Horse Race Park in Gwacheon, Gyeonggi.

“Subin has recovered enough to sing and dance on stage,” an insider from her agency, Happy Face Entertainment, was quoted as saying by Ilgan Sports, an affiliate of the Korea JoongAng Daily. “She has solely focused on recovery during the past four months, and she desperately wishes to perform on stage again.”

The 20-year-old was injured in a car accident on May 23, on her way from Busan to Seoul, after the van in which she was riding overturned on a highway near Ulsan after running into the median. She was transported to a nearby hospital, where it was announced that she had fractured her wrist and had multiple bruises.