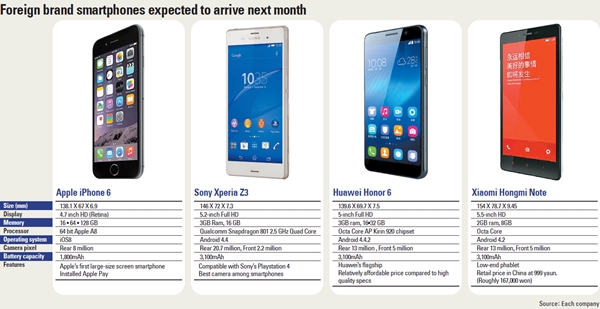 The drumrolls are already beginning ahead of the arrival of Apple’s latest iPhone 6 in the Korean market as early as next month. The company’s first phablet, the iPhone 6 Plus, is expected in December.

Consumers are looking forward to more smartphone options in the second half of the year thanks to the latest iPhones, as well as Samsung Electronics’ Galaxy Alpha and Note 4. But these will not be the only choices.

Other foreign brands ranging from Sony to Chinese smartphones are expected to flood into the market.

The marketing of foreign brands is expected to increase competition, particularly starting next month when the revised mobile device distribution law could take effect. It would require mobile carriers and smartphone manufacturers to disclose the amount of subsidies they provide on their websites. This is expected to discourage companies from offering excessive subsidies and level the playing field for imported smartphones.

The revised law, however, is still waiting for final approval by a private-public joint committee on regulatory reform, which is likely to come this week.

For Apple, hopes are high since its share in the Korean market has been significantly shrinking since the iPhone 4 was released in 2011. The closed operating system and small screen drove customers to its competitors, with its market share falling to 5 percent.

However, changes indicate a new effort to lure Korean customers. One of the biggest changes is that Apple has ditched its philosophy of limiting screen sizes to four inches to attract consumers who prefer larger screens. In addition, it has added LG U+ as a retailer of its products. Considering that the current market share of the third-largest mobile carrier in the country is 20 percent, allowing LG U+ to sell iPhones is expected to not only expand the mobile carriers’ market share but also Apple’s.

The reason for the delayed entrance of the iPhone 6 and iPhone 6 Plus is because the products need to receive Korean government approval to use the mobile telecommunication network. It takes only a week for the approval to be made by the National Radio Research Agency under the Korea Communications Commission. However, the company that applies for the approval has to have its products tested by 40 or so private institutions.

Of course, market experts say competing against Samsung isn’t going to be easy, since Samsung products such as the Galaxy S5 and Note 4 have the upper hand when it comes to processors, which are the brains of the smartphone, as well as to screen size and resolution.

Sony is also gearing up to launch its Xperia Z3 in the Korean market, which was introduced during the recent 2014 IFA event held in Berlin. The Xperia Z3 got approval by the Korean government on Sept. 2, a few days ahead of the official launch in Germany.

“The Xperia E1, which we released early this year with an ambition to reclaim the market after pulling out of the Korea two years ago, has received an explosive response,” said Jang Jina, a manager at Sony Korea. “This time, we plan to solidify our foothold in the Korean market with the Xperia Z3.”

On Huawei’s Twitter account, a posting Sept. 2 claimed that the Honor 6 had been launched in the Korean market and asked if anyone had used it. It was soon removed, but the smartphone industry suspects the posting was part of the marketing strategy of the Chinese company.

Additionally, smartphones from another Chinese company, Xaomi, which has surpassed Samsung to become the biggest smartphone sellers in China, is currently available for special sales online.

With the sales, brand recognition of the Chinese company by Korean consumers is expected to grow and special sales events to increase.

Until now, it has been difficult for foreign smartphones to increase their share of the local market, as they weren’t able to provide the benefits that local brands have enjoyed because of discounts provided by the local mobile carriers through subsidies.

Most sold in online shopping malls or discount marts and lost out on the price competition provided by local carriers.

But things are expected to change starting next month. The mandatory posting of the subsidy will limit companies from offering excessive subsidies, in some cases more than the cost of the device, in order to secure subscribers. Such phones were called “minus phones.”

With similar quality but at lower prices, the number of consumers who will be seeking such foreign brands is expected to increase.

Especially nowadays, many of the people who purchase a second smartphone for various reasons are expected to help boost sales of such cheaper but competitive smartphones of foreign origin.

“The market in Korea will be diversified, ranging from premium- to middle- and low-end smartphones like in other overseas markets,” said Lee Suke-kyu, a professor of business management at Sungkyunkwan University. “The fact that there are large numbers of foreign smartphones has a positive influence on widening consumer choice.”

But some are dubious whether foreign smartphones will succeed in the local market, as Korea is considered a graveyard for foreign brands due to consumer attitudes toward smartphones manufactured in other countries.

Other than Apple, other foreign brands - Motorola, Nokia, Blackberry and HTC - have tried their luck in the Korean market, but failed to leave a significant mark.

Compared to Korean smartphones, the details, functions and services all fell short.

In particular, it would be a burden for foreign brands as the local mobile carriers are reluctant to devote resources to marketing their products.

“Considering the relationship with Korean companies like Samsung and LG, in reality it is difficult to aggressively promote foreign brands,” said an official at a mobile carrier, who requested anonymity. “Although there will be limits as to their market expansion here in Korea, it will serve as a wake-up call for local manufacturers.”