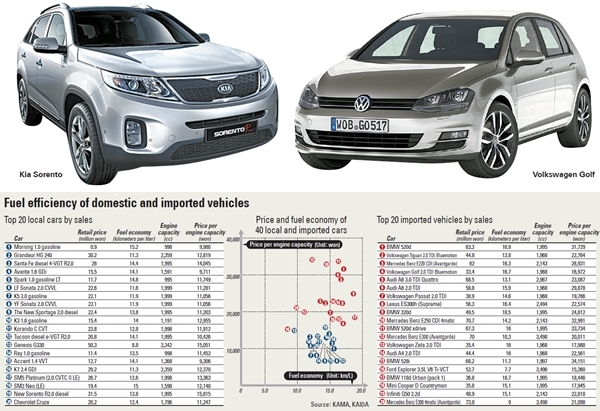 A 40-year-old resident of Dongtan New City in Gyeonggi travels almost 900 kilometers (559 miles) twice a year on Seollal (Lunar New Year) and Chuseok (Korean Thanksgiving). For Chuseok this year, the first stop he made was his hometown in Yangpyeong, Gyeonggi, before returning home to pick up his daughters and traveling to Namwon, South Jeolla, to visit his in-laws.

“Including the shopping that we did in the middle of the trip and traveling to tourist sites, in five days, we’ve traveled a total of 892 kilometers,” said the Dongtan resident, who asked to be referred to as Lee.

His family car is Hyundai Motor’s 2009 Avante, which has a fuel efficiency of slightly more than 14 kilometers per liter (32 miles per gallon), putting Lee’s total costs for fuel over the Chuseok holidays at 117,000 won ($113).

Recently, Lee and his wife sat down to calculate their Avante’s fuel efficiency compared to that of imported brands.

After doing the math for the same distance traveled in a diesel-fueled Volkswagen Golf 2.0, the couple realized the drive would have cost them 88,000 won.

“Since gas prices nowadays are stable, the burden of gas expenses has relatively eased,” Lee said. “But commuting to Seoul to work every day in an Avante doesn’t come cheap. I will be looking into German cars that have excellent fuel economies when I buy a new car.”

He added that he has wanted to own an imported vehicle for a long time, and better fuel efficiency has increased those cars’ appeal.

“I’m trying to convince my wife that it would be good to buy a car with better fuel efficiency even if it costs 10 million won or 20 million won more [than a domestic brand],” Lee said. “There are a lot of people who agree with me.”

Middle-income consumers have become more interested in imported brands in recent years particularly because they have become affordable for average Koreans and often have a higher fuel efficiency.

Office workers in their 30s and 40s commonly perceive German cars to be the best choice.

The secret to the 520d’s popularity is its high-performance diesel engine. It has a fuel economy of 16.9 kilometers per liter and costs 63.3 million won. Most Korean buyers see Hyundai Motor’s Genesis as the main local competitor to the 520d. Of the Genesis models, the most popular is the G330. The fuel efficiency of this gas vehicle, which costs 50.3 million won, is much lower than the 520d’s, at 8.8 kilometers per liter.

Of course, it’s not always true that better fuel efficiency makes for a better economic choice.

Most imported brands that have outstanding fuel efficiency are far more costly than a comparable local model.

In the case of the BMW 520d, it would take more than seven years and nine months until the price difference with the Genesis is gone. This is based on the assumption that a driver in Korea travels an average of 14,527 kilometers per year and that gas costs 1,914 won per liter and diesel costs 1,726 won per liter.

When there is a different version of the same car model, the analysis uses the one that has sold the most.

The second group includes imports such as Mercedes Benz’ E300, E300 4matic and the Audi A6 4.0 as well as local cars like Hyundai Motor’s Genesis and Kia Motors’ Sorento. In this group, BMW’s 320d and 118d Urban showed the highest fuel economy with 18.5 and 18.7 kilometers per liter, respectively.

The Audi A6 3.0 TDI Quattro was the only sedan with a 3-liter engine that made the top 20 best-selling cars lists. The vehicle is price competitive with other imports and has a similar engine capacity to the BMW 530d xdrive and Chrysler 300C diesel, but has a better fuel economy.

Most Korean cars were in the last group, with a unit price of 15,000 won per cc or less.

The Morning is the best-selling domestically-made vehicle, with more than 46,700 units sold in the first half of the year.

Besides the Morning, Renault Samsung’s SM3 Neo had the highest fuel economy at 15 kilometers per liter.

The flagship vehicles of Hyundai Motor and Kia Motors - Grandeur, K7 and LF Sonata - had relatively low fuel economies of about 11 kilometers per liter.

Among local SUVs, Hyundai’s and Kia’s Tucson, Santa Fe and Sportage reported a fuel economy in the 14 kilometers per liter range.

The Sorento, which is the most expensive domestic SUV at 31.5 million won, is only 1.85 million won cheaper than the comparable Volkswagen hatchback Golf. But its fuel economy is far lower, at 13.8 kilometers per liter.

For those who want a car with a spacious interior, the Sorento might be a better choice. But for compactness, the Golf is your answer. It would take about five years and 10 months for the driver of a Sorento to make up for the price difference with the Volkswagen, considering the cost of gas and the fuel efficiency.

Its fuel efficiency was 1.1 kilometer per liter worse than Hyundai Motor’s Genesis G330 whose engine capacity is at 3,342 cc.

Among the top selling cars, Mercedes Benz’s E300 4matic was the most costly at 73.8 million won, with a fuel efficiency of 9 kilometers per liter. It barely made it on the top 20 list, selling 1,057 units in the first half.

Hyundai Motor’s Genesis G330 has a similar engine capacity and is 23.5 million won cheaper than the E300 4matic.

But while the fuel economy of imported brands is improving, local cars are not.

The all-new Sorento released last month has a fuel economy worse than its earlier version. Hyundai Motor’s most recent Sonata has an improved fuel economy of 0.2 kilometer per liter.

The large-size sedan new SM7 Nova, which Renault Samsung released recently, has the same fuel economy as an earlier model.

The companies all made the same excuses, having focused on safety and driving performance and not on fuel efficiency.

But experts say consumers want cars with better fuel economy and that Korean manufacturers fail to listen to that demand.

“Korean automakers have to find a technology that will break through the fuel economy competition but it seems they haven’t made much improvement and so they are emphasizing safety and performance as their selling point,” said Lee Ho-geun, a professor of machinery and automobiles at Daeduk College.

“Without research on environmentally friendly diesel engines, which is today’s trend, [Korean brands] could be facing a crisis.”