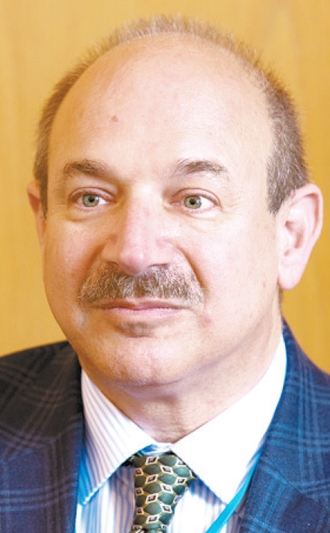 LINDAU, Germany - Bruce Beutler, an American immunologist and geneticist, is a co-recipient of the 2011 Nobel Prize in Physiology or Medicine for his contributions toward the discovery of the activation of innate immunity, an individual’s natural resistance toward bodily infection.

His parents immigrated to California in the 1930s from Germany, among the many who fled the Nazi persecution of Jews.

An avid scientist, Beutler said that in many ways he attributes his curious mind to his heritage.

“My last name is pronounced in a German - not an English - way, like ‘Boitler.’ I’m a descendant of immigrants who came to America from Germany, who as a nation contributed quite a lot to scientific development,” he said. “As a result, I am very proud of my German heritage.”

Before he was awarded the Nobel Prize, Beutler enjoyed an accelerated career in academics.

He continued his medical training at the University of Texas Southwestern Medical Center in Dallas, where he currently works as the director of the Center for the Genetics of Host Defense.

Until now, he has also served in a number of academic positions. From 1981 to 1983, Beutler was a resident at the Department of Neurology in Dallas, then worked for the next two years as a postdoctoral fellow at Rockefeller University in New York, moving up as an associate professor and researcher.

He returned to Dallas in 1986 to work as an assistant professor in the Department of Internal Medicine at the university’s Southwestern Medical Center, where he became a professor in 1996.

Q. Despite having a specialty in neurology, what reasons did you have for studying basic science?

A. I majored in biology at [the University of California, San Diego], then went to medical school in Chicago. When my father said it was OK for me to attend, and even recommended I go to medical school, I was very pleased. This meant that I could pursue a lifelong study of biology. Medicine as a subject has its breadth as well as its depth, and biology was exactly this. It also acted as something that showed the benefits of science in reality. For me, studying medicine really widened my horizons because it expanded my knowledge of basic science.

What made you take an interest in science?

My father [Ernest Beutler] was a scientist. He was a hematologist and a geneticist. I used to help him with his lab work when I was very young, and it was then that I really developed a passion for biology. But there were other things here and there that I did, too, that helped in developing my interest.

How did you combine biology and medicine?

Research in the fields of molecular biology and genetics was used to study inflammation and innate immunity. The [Department of Internal Medicine] also studies the relationship between inflammation and cancer through the study of cancer cells in mice. Research like this has helped the development of treatments for conditions like rheumatoid arthritis, Crohn’s disease and psoriasis.

You devote yourself both to basic and clinical medicine. What is your research in those fields like?

I have also studied the relationship between inflammation and autoimmune diseases such as lupus. This research has furthered information available on the congenital immune system, for which I was awarded the Nobel Prize.