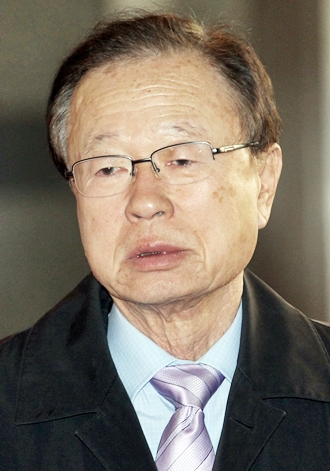 “It is frustrating and regretful that a person who served as a National Assembly speaker lacks consciousness about human rights and sexual crimes,” the committee stated. “We require the [ruling] Saenuri Party take the most decisive action according to the party constitution and regulations.”

The incident reportedly occurred when Park, a standing member of the Saenuri, was playing golf at a club in Wonju, Gangwon, on Thursday.

While playing the game, Park’s caddie reportedly complained about Park’s physical contact and asked for a substitute. The club is known to have then sent a male caddie.

“Technically speaking, caddies are individual businessmen, but we are also bound to protect them,” said an official at the golf club. “We are deciding how to respond with our advisory lawyer.”

Later, Park tried to defend himself, though his remarks backfired.

“I only poked her with my finger in her chest, and they are saying I touched her body,” Park said.

“I have two daughters and I often tell them they are pretty and cute. So I just tried to tell her she’s cute because of the habit.”

The NPAD’s National Women’s Committee slammed his explanation, however, saying, “Park admits he had physical contact with the caddie, but seems to be trying to shift responsibility to the victim, claiming that she did not complain at all.”

Park’s statement became even less convincing when another caddie of the golf club told the local media, “I caddied for him several years ago, and his attitude was very bad, too. He was an unwelcoming figure among the caddies.”

The 23-year-old reportedly told police that she felt sexually humiliated. The Wonju police are currently planning to request that Park appear for questioning, possibly this week.

The report last week isn’t the first time a politician or government official has been accused of sexual impropriety, however.

In May 2013, Yoon Chang-jung, 58, the Blue House spokesman at the time, made headlines after he was accused of sexually assaulting a female intern during a trip to Washington by President Park Geun-hye. The case is reportedly still ongoing, though Yoon was dismissed from his position a few days after the scandal broke.