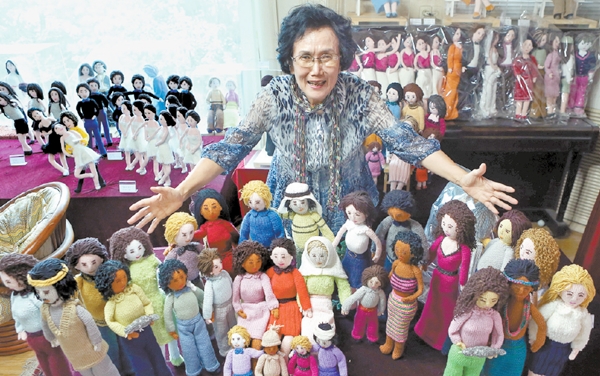 Kwon Gi-hong, 74, showing her handmade dolls. “I want to make a sensation,” she says. By Kim Seong-ryong

Shortly after Kwon Gi-hong turned 70, she stumbled upon a craft class at a church. Before long, Kwon had developed a passion she hadn’t felt in 40 years as a housewife: making her own dolls. And her ambitions are sky-high.

“I am planning to open an exhibition in Europe next year,” she says. “I want to provoke a sensation like Psy did.”

Kwon is a member of what is now being called the 6074 generation, referring to people between the ages of 60 and 74, a demographic that is swelling as Korea’s population rapidly ages.

The 6074 generation are considered Korea’s “young” senior citizens, just starting retirement but shy of the advanced ages in which energy starts to flag and health problems worsen.

Today’s 6074 generation were the men and women who ran the machines that made Korea an industrial power. Many had to give up loftier dreams to work in factories or export offices. Many women of that generation had to forsake learning opportunities that were given instead to their brothers in a male-dominated society.

But some of those dreams are being reawakened as the generation finds itself in comfortable retirements with time on their hands - dreams that have been dormant for decades.

According to the Education Ministry, the number of member of the 6074 generation attending four-year colleges reached 532 last year from 354 in 2009, a 50.3 percent increase. During the same period of time, elderly students at two-year vocational colleges climbed to 1,125 from 890 in 2009.

“One night, I lay on my bed and finally felt freedom,” said Kim Young-hi, an artist who uses Korean traditional paper. “It was the freedom of getting past the age of 60.”

Kim recently published a book on her senior year metamorphosis entitled, “I Graduated from Being a Mom.”

The 6074 generation grew up relishing art and literature, particularly the girls. As they got older, however, those passions became luxuries they could hardly afford. They were up to their necks in working outside the home, raising children and helping their husbands.

After retirement, those passions were reawakened.

Kim Bo-gyun, 66, a farmer in Jeju Island, always wanted to write when he was a child, but he abandoned his dream because of busy farm work.

After retiring, Kim studied essay writing at Jeju National University’s Continuing Education Center for two years. And three years ago, his efforts paid off when an essay entitled “Meditation on Rainy Days Three Years Ago,” was published, beginning a late-life literary career.

Kim In-gwon, 60, did not abandon a life dream even after a failure. After a career as an insurance agent, he decided to study literature. But he applied for Dong-A University’s evening classes in 2011 and was rejected.

Undaunted, he tried again the following year and got in. Kim is now a junior majoring in Korean literature.

“The university entrance exam was never easy, but learning is so much fun,” he says. “You never should be afraid of making a new start. There is not a lot of time left to waste agonizing over things.” 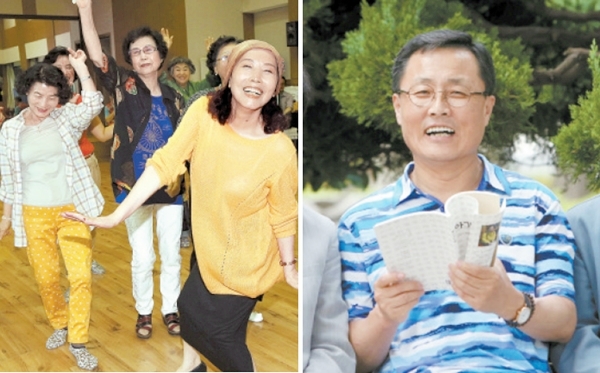 “The 6074 generation did not have enough opportunities to satisfy their desires because they were in the swirl of the economic development period while at the same time striving to survive,” says Hwang Jong-yeon, a culture critic.

“In a sense, the literature field is relatively cheap and easy to get into, so literature is a good means for the 6074 generation to express themselves.”

The 6074 generation’s renaissance is also beneficial to their physical and mental health.

After working 30 to 40 years, some retired people lapse into depression

Yun Gi-suk, 70, who entered Chosun University this year to major in painting, overcame depression by going back to school. She gets along with young classmates, goes on trips and joined an aerobic dance contest.

“It was hard at first, but I feel like I am becoming smarter,” Yun said. “I shook off depression, which I suffered for two months before I started to study.”

Kwon In-sun, a professor at the department of internal medicine at Inje Univerity Seoul Paik Hospital, said the 6074 generation achieves three things by going back to school: communication skills through relationships with the young generation, better body functions and improved cognitive functions.

“It’s a question of ‘Use it or lose it,’” Kwon says of improving bodily and mental health for the 6074 generation.

Kim Jong-hwa, 65, studies at Korea Polytechnics, a state-run vocational training institution. On his commute, he doesn’t use elevators, escalators or buses. He walks from subway stations to the campus instead of taking a bus.

“I rarely feel tired,” Kim says. “I think that’s because I study what I want to.”

Cho Byeong-gon, 63, thinks he is healthier than before because he started to run a craft shop after retirement. The work requires stamina. Walking back and fourth for an hour from the craft shop to home spurs his creativity as well, he says.

“To actively participate in social activities will help the 6074 generation ward off Alzheimer’s disease,” said Na Duk-lyul, a professor in the department of neurology at Seoul Samsung Hospital.

“I was discouraged by what some other people said,” recalls Shin Hyun-uk, 61, who belatedly earned a bachelor’s degree online. “They said, ‘Why bother to start studying again. It’s useless.’?”

Go Su-seon, 60, who graduated from Jeju National University majoring in textiles, says, “In the case of design, computer skills are crucial, and that was the most difficult part.”

Currently, there is no governmental help for the 6074 generation to pay school tuitions. Fees differ by major, and range from 8 million won ($7,726) a year to 10 million won.

“Government support policies are needed to encourage universities to open their doors to the 6074 generation and provide education for them,” said Choi Byung-ho, chief of the Korea Institute for Health and Social Affairs.

Cha Young-suk, 63, appeared on a stage at the grand theater at Seodaemun Culture Center last year. She took a main role in a play called “Does Anybody Know This Person?”

She had learned to act for three years at Seodaemun Senior Welfare Service Center. At first, Cha was doubtful about the class, thinking to herself, “Can a senior welfare center class really be helpful?”

Her doubts were dispelled when she started to study. The class was professionally taught and Cha’s son now calls his mom, “The actress!”

The Korea Institute for Health and Social Affairs surveyed 705 seniors who are taking classes of various sorts and 45.8 percent said they use senior welfare service centers.

They are conveniently located, charge cheap tuition fees and offer a variety of programs. Senior welfare service centers have grown in number from 228 in 2008 to 317 last year.

Some older people are more comfortable studying at senior centers than at universities.

“I get self-conscious when I study with young students,” says Kim Jeong-oh, 73, who is taking watercolor painting classes at Woori Mapo Community Welfare Center, northwest Seoul. “But here, people encourage me and my paintings with a lots of applause.”

“Senior welfare service centers are a unique welfare infrastructure that exists only in South Korea,” said Jeong Yun-sun, section chief of senior policy at the Ministry of Health and Welfare. “They play an essential role in bringing to reality the dreams of the 6074 generation.”