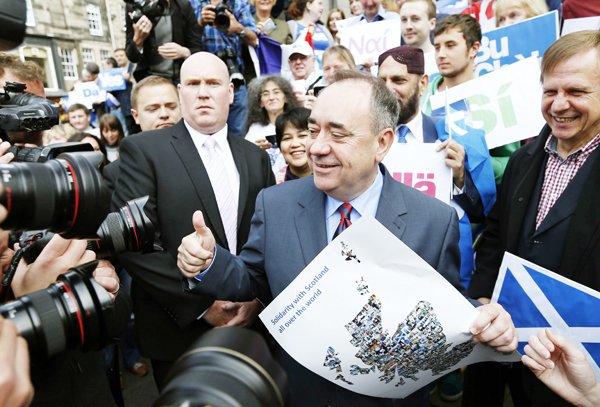 Alex Salmond, center, Scotland’s first minister, poses for the media as he campaigns in Edinburgh, Scotland, last week. Scottish nationalist leader Salmond said there was nothing new in London’s offer of greater powers to Scotland and that the unionist campaign was falling apart ahead of Tuesday’s referendum on whether or not to end the 307-year-old union with the rest of the United Kingdom. [REUTERS/NEWS1]

If Scotland votes to leave the United Kingdom on Sept. 18, one cause will be the disguised English nationalism of unionists who try to argue, at the same time, to keep the United Kingdom together and break the European Union apart.

The most colorful example of this hypocrisy, U.K. Independence Party leader Nigel Farage, was in Glasgow on Friday to deliver this message: Scotland would be better off if it stays in the United Kingdom, and wouldn’t gain real independence by leaving; the United Kingdom, however, should leave the EU, because it would thrive economically and gain true sovereignty.

Both debates focus on the costs and benefits of leaving, yet in reality are driven by emotion. In both, global banks and auto manufacturers are warning that a split may force them to leave the smaller, seceding unit for the mother ship, meaning a loss of wealth and jobs. An economist visiting from Mars would conclude that the big risks for both Scotland and the United Kingdom lie with leaving, if only because less change involves less uncertainty.

Which gets to the “nationalist” part of these debates. Scots, on the whole, don’t get misty-eyed about the United Kingdom. In 1707, when the Acts of Union were signed, the streets of London were thronged in celebration, while in Edinburgh they were empty and the mood was sour, according to historical accounts. Scots agreed to merge with England primarily for reasons of security (they needed a bigger Protestant ally against potential Catholic threats) and near-bankruptcy (Scotland had lost spectacularly in the 1690s from an attempt to compete alone in the colonial trading game).

This head-over-heart decision worked well for Scotland for most of three centuries, but evidently is now vulnerable. Many in England find the Scottish enthusiasm for a divorce perplexing, if not hurtful. Yet those same people argue vehemently for their own heart-over-head decision to leave the EU - which the United Kingdom joined not because Brits loved the Germans and French, but because the U.K. economy fared poorly after World War II, and by the 1970s was a basket case. Membership in the European Economic Community, as the EU was then called, seemed the best way to achieve German levels of growth.

Farage is an extreme case. Yet much of the United Kingdom’s ruling Conservative Party, which has just one of Scotland’s 59 MPs, shares his essential view on Scotland’s position in the United Kingdom, as opposed to their own in the EU. This conflicted logic has infected the very top of the decision-making process. When, for example, Prime Minister David Cameron was negotiating the terms of next week’s referendum, Scotland’s First Minister Alex Salmond wanted two alternatives on the ballot: independence and a continued union with greater devolved powers for Scotland (“Devo Max” in Westminster slang). Cameron refused.

Just months later, Cameron promised the country a referendum on whether to stay in the EU by 2017. Only this time, the choice would be between leaving the EU and staying in a reformed union that devolved more powers to the United Kingdom - a “Devo Max” for the United Kingdom. As the “yes” vote in Scotland has soared, Cameron has panicked: Now he is trying to persuade Scots to stay by promising to give them, if they do, the Devo Max offer that he kept from their ballot, but not the United Kingdom’s.

Worst of all - or best, if you are a Farage supporter - Cameron may well fail to get the rest of the EU to devolve the kinds of powers he has promised to British voters, increasing the possibility of an EU exit.

Which gets to the foolishness in all this: There is no need for the United Kingdom to be on the cusp of breaking up. Handled intelligently and honestly from the start, I doubt that the vote in Scotland would be a nail-biter now. Equally, there was no need for Cameron to set up a vote on leaving the EU, in such a way that he has unwittingly engineered it to favor separation.

The greatest misunderstanding here is the belief - held by the Scottish nationalists and English Eurosceptics alike - that by going it alone they will become truly independent. Both will find they have to negotiate ties remarkably similar to those they cut, resulting in little new power or freedom. Both will find that in a world where politicians struggle to impose their nations’ will in a globalized economy, life in splendid isolation is less glorious than they thought.

*The author is a Bloomberg editorial writer.