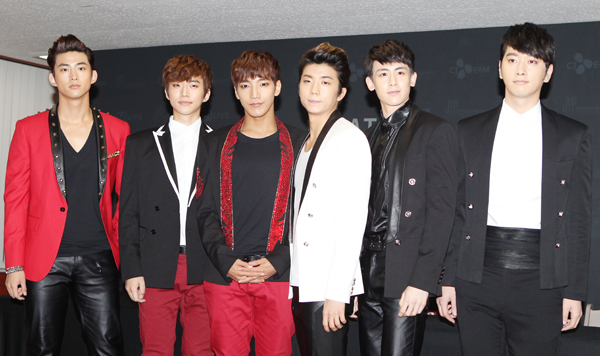 The latest album, “Go Crazy,” has 14 songs including the title track of the same name, which was co-composed and co-arranged by member Jun. K.

Other songs on the fourth album include “She’s Ma Girl,” “Boyfriend,” “Mine” and “Awesome.”

A look into the group’s live performance last Saturday showed all five members dressed from head to toe in a funky, pop-rock style, unlike in the past when they sang and danced half-naked.

“There probably won’t be much skin,” member Taecyeon said in an exclusive interview with Ilgan Sports, an affiliate of the Korea JoongAng Daily.

“I think the crowd is actually numb toward exposure now,” he laughed. “We would be living in the past if we sustained our previous image. We want to be future-oriented.”

When asked how the group prepares for the future, Taecyeon answered they’re more conscious of their health now that they have been working in the music industry for seven years.

“In the past we frequented the hospital because we were always throwing ourselves around on stage,” Taecyeon said in the interview with Ilgan Sports. “But I don’t think we can act so wildly anymore.”