Art defies borders at the DMZ

Art defies borders at the DMZ 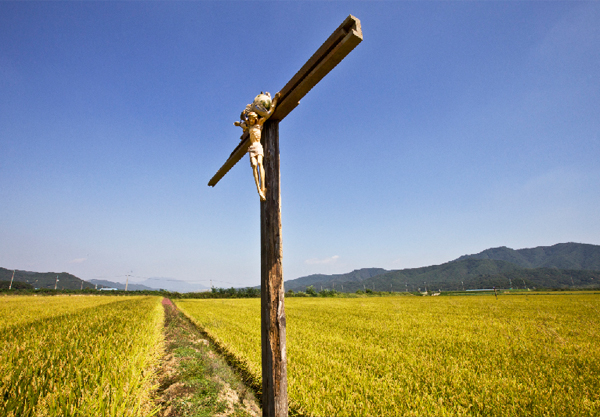 Argentinian artist Adrian Villar Rojas displays a wooden cross erected in the middle of a rice paddy in Cheorwon, Gangwon, titled “The Most Beautiful Moment of War,” in this year’s Real DMZ Project on Sept. 6. The statue of Jesus, nailed in the middle of the art piece, is topped with various crops Rojas collected during his month-long stay in the border city. By Park Sang-moon

CHEORWON, Gangwon - Tension filled the air at the Cheorwon Peace Observatory in Gangwon on an autumn day, as a group of tourists faced a glass window that showed a panoramic view of a land they know little about, but which constantly threatens to turn Seoul into a “sea of fire.”

The intimidator, North Korea, seemed just an arm’s length away. 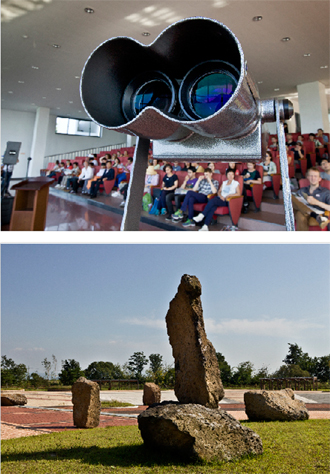 As if to grab the crowd’s attention, a black box hanging from the room’s ceiling began to play music: a sophisticated collection of melodies by German sound artist Florian Hecker.

The crowd cheered with delight as the eerie atmosphere gently drifted away.

Hecker is one of 12 artists participating in this year’s “Real DMZ Project,” a contemporary art project based on studies about the DMZ, or demilitarized zone, a perimeter that stretches 248 kilometers (154 miles) between South Korea and North Korea, and its surrounding areas.

To counter stereotypical images of the front line, local and international artists gathered to show the charms of Cheorwon, a county that borders the DMZ.

The program runs until Sept. 27.

“When Germany was divided, the most popular tourist attraction was the Berlin Wall,” said Nikolaus Hirsch, one of the project’s curators. “It’s ironic that the front line can blossom into a tour mecca, and that fact in itself can actually be an interesting art subject.”

A photojournalist from the Korea JoongAng Daily toured the exhibition on Sept. 6 for a closer look at how Cheorwon, a heavily fortified area just a few miles below North Korea, could be reinterpreted through art. 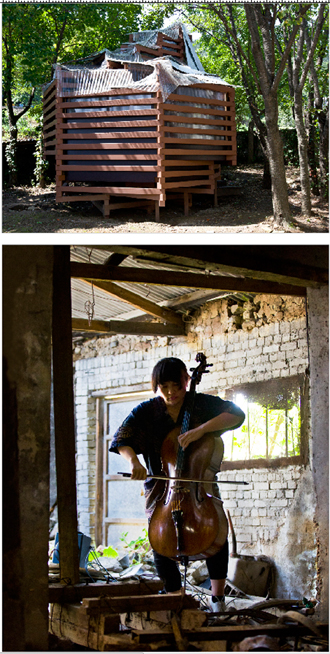 Argentinian artist Tomas Saraceno submitted a telescope, titled “Degrees of Freedom,” to the exhibition, which is displayed at the Cheorwon Peace Observatory.

The object, which previously only showed the DMZ and North Korea, was redesigned by Saraceno to turn 360 degrees, to focus attention on the various species of birds and insects that can be found at the border.

After a tour around Cheorwon Peace Observatory, the photojournalist was escorted to Yangjiri Village, which was North Korean territory until 2012.

A large wooden cross was erected in a golden rice paddy with a statue of Jesus nailed to its middle, as if overlooking the community. The curator explained that Argentinian artist Adrian Villar Rojas created the work after having resided in the village for a month.

Local cellist Lee Ok-kyung played her instrument at an abandoned rice mill, and a video made by Swedish artist John Skoog showed a Swedish farm being renovated into an underground nuclear weapon bunker. Local artist Kim Joo-hyun presented a dugout hut shaped like a bee hive.

Cheorwon’s downtown area was shown on film from the top of a mountain, a work by Canadian artist and filmmaker Mark Lewis. Dinh

Q.Le, a Vietnamese-American fine-art photographer, presented his series of interviews with students living near the DMZ, which featured their thoughts on war, separation and unification.

Back Seung-woo, “Stigmata” ; Albert Samreth, “Dancers on a Plane” By Park Sang-moon

A collection of photographs taken by artist Back Seung-woo shows areas near the DMZ, and another display at Woljeong-ri Station, created by Choi Jae-eun, is a neon sign that reads “No Borders Exist in Nature,” while sound recordings of a United Nations soldier from the 1950-53 Korean War are played.

The tour came to an end near the 362-meter summit of Mount Soyi, where a display of home appliances made by U.S. conceptual artist Albert Samreth wowed the crowd.