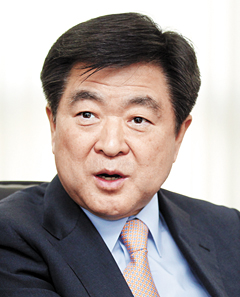 Hyundai Heavy Industries has overhauled its top management as losses at the nation’s largest shipbuilder continued to grow.

On Sunday the company announced that Lee Jae-seong was stepping down as chairman. Lee’s resignation came just 10 months after he was promoted from president to chairman in November.

Lee is a close friend of the shipbuilder’s owner and largest stake holder, Chung Mong-joon, as they attended the same high school and college. 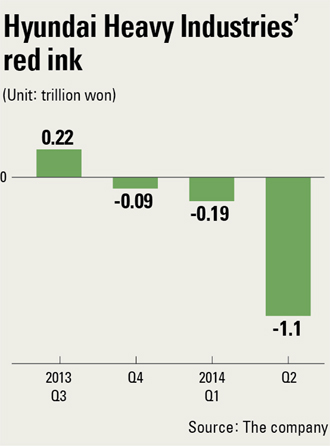 However, Lee’s connection and 50 years of friendship with Chung Mong-joon failed to keep him in the job.

The new chairman, as announced earlier, will be Choi Kil-sun, a company veteran and former CEO with a good track record.

He will be in joint command with Choi, who was promoted to chairman last month.

The company statement said the reshuffle shows its will to overcome its profitability crisis.

In the second quarter, Hyundai Heavy Industries reported an operating loss of 1.1 trillion won ($1 billion). That’s the worst performance the company has reported since it was founded in 1973.

The biggest problem the company faces is a shrinkage of orders.

In the first eight months of this year, global orders in the industry dropped 24 percent compared to the same period last year, and the impact is particularly severe for Korean companies. While orders in China have shrunk 14.5 percent, Korea’s have fallen 31.7 percent.

“Performance improvement will be limited in the second half,” said Lee Kyung-ja, an analyst at Korea Investment & Securities.

Aside from overall weakness in the industry, mismanagement is also a factor at Hyundai Heavy Industries. The company miscalculated the cost of building an offshore plant in Norway. Initially, the facility cost was calculated to be $1.2 billion, but that figure has more than doubled now.

For 19 consecutive years, the company’s management and labor union have reached agreements amicably. But this year labor relations turned sour, with the union preparing for a strike.

The market has hopes for the new management. Between 2005 and 2009, while Choi served as the shipbuilder’s CEO, the company’s operating profit increased significantly.

Choi is a founding member of the company and knows it inside out. He graduated from Seoul National University, majoring in shipbuilding and engineering.

Kwon joined the company in 1978 and has worked at the London office. He also worked with Choi in Seoul. He has proven his management skills while serving as Hyundai Oilbank CEO since August 2010. The situation for oil refiners is as bad as that of the shipbuilding industry. Yet Hyundai Oilbank is the only profitable company among the four top refiners.

It is said that Choi asked Kwon to co-manage the company with him to take advantage of his skills in communications and labor relations. Kwon has a talent for getting along with the employees. He even let one of his employees use his Equus as a car for the worker’s wedding.