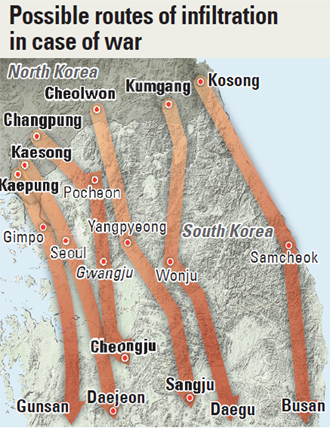 Since the Kim Jong-un regime began, Pyongyang has been bolstering its combat readiness for an all-out war with South Korea, a source well informed on North Korea told the JoongAng Ilbo.

“It has been detected that Kim Jong-un, after the death of [his father] Kim Jong-il in December 2011, gathered all military leaders to revise and bolster their strategy for a full-scale war,” the source said on Sunday. “Our military authorities shifted recently from the pre-existing strategy to counter North Korean provocations based on the assumption of a limited war to a plan in the direction of preparing for a full-scale war.”

Kim has also been riling up his military with warlike rhetoric about unification, the source said, and unexpectedly visiting front-line and special units to evaluate their operational capabilities.

Military officials here also said that South Korean and U.S. forces are changing their countermeasure strategies in case of provocations from Pyongyang, which in the past focused on limited attacks such as the Yeonpyeong shelling in November 2010 that killed two Marines and two civilians.

Instead, they are coming up with a counterstrategy for a possible nuclear attack, which could happen in conjunction with an invasion across the military demarcation line in which conventional weapons would be used. Such military moves in Pyongyang were confirmed by testimony of a defector who was a key military official in the North Korean military who sought asylum here earlier this year, according to military sources.

“This North Korean military personnel who came into South Korea through a third country is a field grade official, and, as contrasted to other military defectors in the past, worked in a key division dealing with military operations and intelligence,” a military intelligence source said. “We were able to gather significant intelligence on North Korea’s military strategy and changes in tactics toward the South since the Kim Jong-un regime took place.”

Because the defector is receiving special protection by the South Korean government, further details about him were not available.

The report by Security Policy Networks, a South Korean think tank, also claimed that three drones found in Paju and Baengnyeong Island in March and Samcheok in April, which the government concluded were from North Korea, were part of Kim Jong-un’s 2015 plan for a war for unification. It said that the drones followed Pyongyang’s possible invasion routes.

The report also said that one such route for an amphibious raid by North Korea’s special units of 5,000 troops follows from across Musan County in North Hamgyong in its west coast to Mount Gwangdeok in Gangwon Province in South Korea, down the Jungbu Naeryuk Expressway, a major freeway going through South Korea.

Defense expert Hong Seong-min, head of Security Policy Networks and advisor to the Saenuri Party on North Korean nuclear issues, said, “North Korea’s spying on our territory through the drones signifies that it has completed its preparations for a full-scale war. The South Korean military has to re-evaluate its fundamental posture in preparation for such a full-scale war.”

A government official said, “South Korea and the U.S. are jointly analyzing the intentions behind the routes of North Korea’s drones and are gathering further intelligence on it.”

Another source said that Kim Jong-un recently visited a front-line unit in the eastern front and mobilized soldiers for an emergency rifle drill, demoting the unit’s commander.

“Through reading Kim Jong-un’s lips that day in footage from North Korean TV, it appears he was severely warning the command and mentioned war,” the source said.

“In a situation where the North Korean athletic delegation is here for the upcoming Incheon Asian Games opening on [Sept.] 19, it is unlikely that [Pyongyang] will act rashly, but we are preparing for all scenarios.”