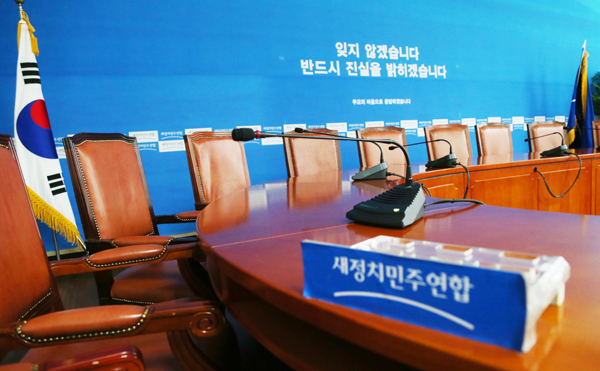 A meeting room inside the floor leader’s office for the New Politics Alliance for Democracy in the National Assembly was empty yesterday.By Kim Hyung-soo

Stung by calls by fellow party lawmakers for her to step down as leader of the opposition New Politics Alliance for Democracy, Park Young-sun threatened to leave the party altogether and then went into seclusion with her phone shut off.

As the party spiraled into confusion and disarray over its boycott of legislative activities, Park also canceled all her meetings at the National Assembly yesterday, after more than 30 NPAD lawmakers called for her to voluntarily resign from the party leadership over the weekend.

“First- and second-term lawmakers openly demanded that I resign,” said Park in an interview with CBS on Sunday. “Then I have no choice but to leave the party. My heart sinks because I feel I am driven out of it.”

She also expressed deep frustration at some of her party members for perpetuating internal feuds and challenging her authority, saying, “With the current party condition, no one would want to join our party. We have little chance of winning in the 2016 general and 2017 presidential election [if things remain the same].”

Park’s threat to desert the party that she has belonged to since her debut in politics in 2004 caught many off guard and has shed light on the NPAD’s deeply divided state.

“Under no circumstance should Park ever leave the party,” said Rep. Park Beom-kye of the NPAD during a press briefing yesterday at the National Assembly. “We have pledged that even if she wishes to leave the party we will strongly dissuade her from doing that.”

But reflecting on the disarray of the opposition, Park admitted the party had failed to contact its own floor leader after she went into seclusion Sunday night. “We can only guess she’s pondering hard over the events that unfolded,” he said.

The showdown began Sunday when a group of 15 NPAD lawmakers including Reps. Noh Young-min and Jin Sung-joon demanded Park give up her interim leadership position and the speaker position. That demand was echoed by other lawmakers considered more moderate, dealing a further blow to Park’s already damaged leadership.

The open denunciation of the party leader was a result of Park’s attempt last week to appoint a former Saenuri Party member as one of the two co-heads of the party’s emergency committee, which will basically control the NPAD until it holds a party convention early next year to elect a party leader and supreme council members.

Park chose Lee Sang-don, a professor emeritus at Chung-Ang University and a former member of the ruling Saenuri Party who worked for a reform committee prior to both the April 2012 general election and the Park Geun-hye presidential campaign later that year.

Park attempted to push ahead with Lee to lead the reform of the party along with another professor emeritus, Ahn Kyong-whan, as co-heads of the emergency committee. A furious Rep. Jung Chung-rae said asking Lee to reform the party was a betrayal of party members and vowed to do anything to prevent it.

Dissenting lawmakers say Park has been too headstrong and unilateral as a party leader, including making two agreements with the ruling party on the terms of a law to investigate the Sewol tragedy that she was forced to break after facing opposition from relatives of the teenage victims in the Sewol sinking.

The action against Park was a display of dissatisfaction among hawkish opposition policy makers to her move to move the party ideologically more to the center from the left.

After a surprisingly high number of NPAD lawmakers denounced Park and called on her to quit, Park reportedly told close associates she was appalled to see how ideologically rigid the party had become.

While the opposition was frantically trying to reach Park to prevent her from abandoning the party altogether, Park’s Saenuri counterpart, Lee Wan-koo, expressed his bemusement about the situation.

“To put it simply, the NPAD has no emergency committee leader now and the floor leader is nowhere to be seen,” said Lee during a Saenuri lawmakers’ meeting yesterday.

On trying to come to agreement on the special Sewol law, Lee also expressed perplexity. “I don’t know what their official position is on the issue. We need a partner to sit at a table to negotiate. But that partner is gone now.”

There is no parliamentary schedule to pass pending bills.