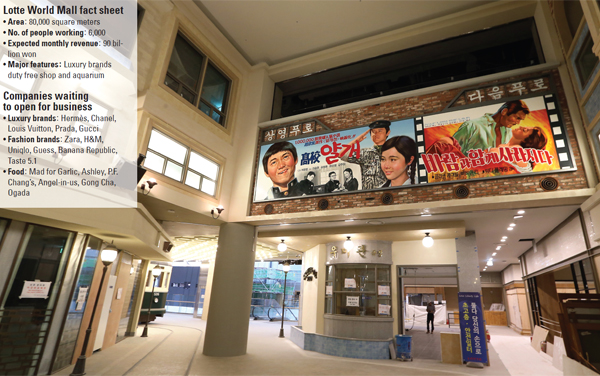 ELF F&B, a company specializing in restaurants, is just one of the many businesses that has suffered financially as the opening of Lotte World Mall is repeatedly delayed.

“We’re a company that has posted surpluses for the past three years,” said Kim Yong-chan, an executive at ELF F&B. “But because of the postponed opening, we’ve turned to a deficit.”

Since May, the company has been ready to open P.F. Chang’s, a 661-square-meter (7,224-square-foot) Chinese restaurant at Lotte World Mall in Jamsil, southeastern Seoul. P.F. Chang’s is an American franchise with more than 200 stores in the United States and 45 in 18 other countries.

Kim said an additional 20 or so employees hired for the opening of the restaurant in May also cost the company.

“We kept them until August, but as the opening kept being postponed, we couldn’t hold onto them anymore since most of them needed immediate paychecks.”

Lotte World Mall is part of the second Lotte World the conglomerate is building in Jamsil, southeastern Seoul. The mall is a separate building 100 meters away (1,076 feet) from the 123-story World Tower.

Lotte in June requested temporary-use approval from Seoul Metropolitan Government, which has not yet given the go-ahead because of traffic and safety concerns.

Lotte last month submitted documents showing the enhanced safety precautions it has made. Seoul government was supposed to decide Sept. 4 whether to allow the retail section to open, but again delayed a decision.

The government said it needed to observe safety training with experts, monitor traffic, hold a press tour and, if needed, create a task force from the Songpa District Office, Songpa police and Lotte.

Kim Young-ja, a manager at fashion product store Taste5.1, said she has taken a leave from work for the first time in 23 years. In July, she quit her old job for the new position at Lotte World and took with her two other employees who had worked with her for seven years. She said she felt responsible for the other employees, who haven’t been paid for three months. So last month she took a part-time job at another store so she could at least give them some pocket change for the Chuseok holiday.

She says even designers supplying the stores are affected by the delay.

“It’s a torture to tell these young designers, who had high hopes that they had finally secured a route to show their work, to wait a bit longer,” Kim said. “Them, us, me, we all feel like we’ve been in a ditch.”

Choi Seung-yoon, who has already set up an 82-square-meter Korean traditional tea shop called Ogada at the entrance to the movie theater on the sixth floor, expressed his disappointment.

He has spent a large amount trying to recreate Korean streets in the 1920s and 1930s. He even hired bilingual employees. But the store has been collecting dust.

“The people who are most sensitive and concerned about safety are me and my employees,” Choi said. “Yes, safety is most important, but it is sad that unnecessary fear is being created.”

Kwon Na-young, who was hired as store manager in April, has been working at other Ogada stores every week. She was hired thanks to her language skills. But at the moment she’s spending more time taking out the trash and cleaning floors.

“My dream of introducing traditional teas to foreign customers seems to be out of reach and doing chores is what I’ve become,” Kwon said.

Kim of ELX said the repeated delays are damaging the country’s brand image.

“If we told [the headquarters] from the beginning that the opening would be delayed for a year, they would have understood,” Kim said. “However, without any apparent reason and with no schedule, we now sound like the boy who cried wolf.”

There are about 460 luxury brands like Hermes and Chanel as well as 420 fashion brands like Zara and H&M, 120 restaurants and about 10 service businesses like banks and convenience stores.

In total, 1,000 stores are still waiting for their first customer.

“The 6,000 or so people working at Lotte World Mall also are residents of Seoul,” said a fashion store employee. “Our livelihoods should be respected.”