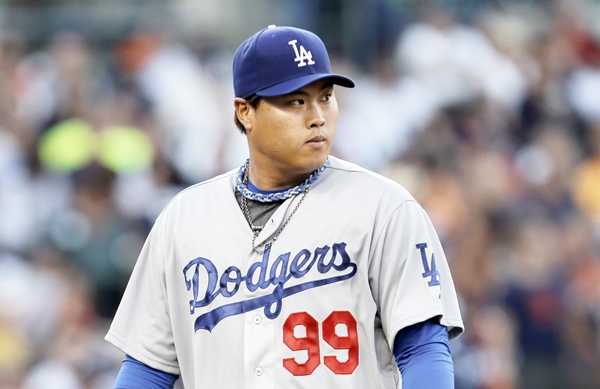 It looks like fans of Ryu Hyun-jin can breathe a little easier.

Ryu received a cortisone injection during the exam, which showed no structural damage.

However, the team said Ryu will miss his next scheduled start against the Colorado Rockies.

Ryu will not throw for at least the next four days, but he is expected to rejoin the team for a three-game series against the Chicago Cubs that begins on Thursday.

“It’s good news as far as we’re concerned,” said Dodgers Manager Don Mattingly, according to MLB.com. “There’s nothing new from any of his original MRIs. … He’ll be off for the next couple days and then meet up in Chicago with us and start throwing. Then we’ll see where we’re at.”

Less than two weeks remain in the regular season.

Pain in his throwing shoulder forced Ryu to leave Friday’s game against the San Francisco Giants after giving up four runs in the first inning of a 9-0 defeat.

He picked up his seventh loss of the season against 14 wins.

Ryu generally performs his best when he has five days of rest, which he had on Friday. But his fastballs were only 88-89 miles per hour, compared to his usual 90-92 miles per hour.

Mattingly said it is questionable whether Ryu will make his scheduled start against the San Francisco Giants on Sept. 22, saying he will not pressure his pitcher to return quickly.

“I don’t want to speculate,” Mattingly said. “I just want to see where this goes.”

The Giants trail the Dodgers by four games in the National League West and are three games ahead of the Pittsburgh Pirates for the top wild-card slot.