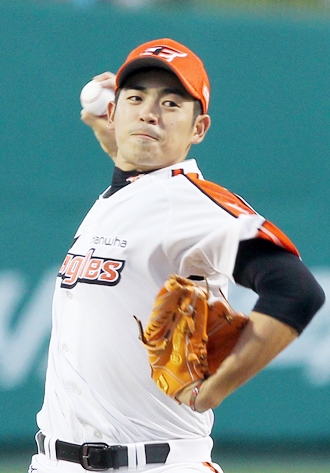 Pitcher Lee Tae-yang - whose first name literally means “the Sun” - has been one of the few bright spots in a dark season for the last-place Hanwha Eagles.

This was his fifth season in professional baseball, but the first spent entirely with just one team.

He is 7-8 with an ERA of 4.70 and has 14 quality starts in 23 appearances, good enough for second in the Korea Baseball Organization after Kia Tigers ace Yang Hyun-jong, who has 15.

The 24-year-old Lee also opened a new chapter in his baseball career with his first-ever selection to a national team for the 2014 Incheon Asian Games.

Ilgan Sports, an affiliate of the Korea JoongAng Daily, sat down with Lee to talk about his life in baseball and the upcoming Incheon Games.

Q. This season must be a meaningful one for you. How do you feel so far?

A. I agree. I think I’m writing a new chapter in my baseball career, but I won’t be satisfied with my performance so far this season. I want to wrap up this season with a better record and try to improve myself for next year.

What were your goals prior to the season?

In the spring training camp, my goal was to take one of the five spots in the starting rotation, but I was sent to a minor team after camp. I rejoined the team in May and made my debut as a starting pitcher on May 9, and I’ve been in the rotation ever since.

I think my biggest achievement is gaining the confidence to know that I’m able to survive in the KBO jungle and earning the respect of my teammates.

Some fans say the Eagles have found a new ace to succeed Ryu Hyun-jin, who left for Major League Baseball two years ago. Do you feel any pressure from such expectations?

Not really. I kind of enjoy those expectations, because it means fans care about me and are watching me. But this is only the beginning. I think the next one or two seasons will be very important for me to become a competitive starting pitcher. In order to be called an ace, I think I should win at least 10 games in each of the next three seasons.

You will pitch in the Incheon Asian Games. How do you feel about that?

I still can’t believe I will represent my country, and I have felt a heavy responsibility soon after receiving a national team uniform.

What are you goals on the national team?

All I want is to perform my best so I can contribute to the team winning the gold medal. I was a starting pitcher on my team, but I don’t care whether I am in the rotation or the bullpen. If Manager Ryu Joong-il uses me as a starting pitcher, I will try to pitch as many innings as I can so I can give some rest to the relievers. Since the Incheon Games will be held in the middle of the season, I know many of the national team members will be tired.

You will meet many KBO stars. What do you expect from that experience?

That actually is a moment I’m waiting for. I especially want to learn many things from veteran Lim Chang-yong [closer for the Samsung Lions], as he has much experience in the KBO, Japan, and even in the United States. I want to learn how he manages himself.

Did you ever represent the country when you were amateur?

I didn’t. This is my first time getting a uniform that has the national flag on it.

Fans say the Asian Games are a good opportunity for you to be exempt from the two-year military duty if the team wins the gold medal. Do you agree?

I can’t say that I don’t care about that benefit, since it makes a huge impact on every ballplayer’s career, but I want to make it clear that my goal is to win the gold medal. It is a benefit that only comes if we win the tournament.

People are a little worried about you because you struggled after being selected to the national team.

I think I felt some pressure at the time. I told myself that I have to perform better in every appearance and that mind-set actually drove me in the wrong direction. But my pitching coach [Jung Min-chul], who has had a lot of experience with the national team, gave me good advice that stabilized me mentally, and I started to get better. What I’m trying to do now is enjoy the show.

Do you have a resolution for the Asian Games?

The nation expects us to win the gold medal, and I think all we need to do is to meet that expectation.

We will try our best to achieve the best outcome, so I ask fans to support us at the ballpark just like they have been.