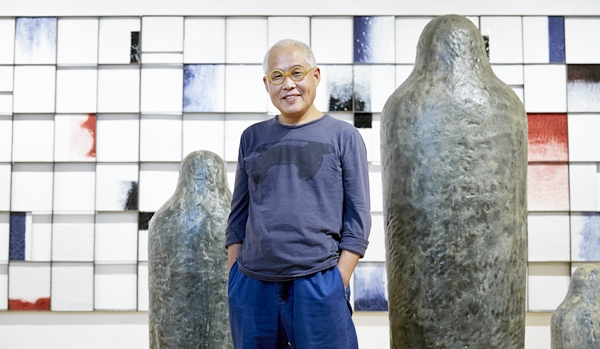 Shin Sang-ho poses before his installation “Surface ‘n Beyond,” which is now on display at the Kumho Museum of Art in central Seoul as part of the ceramic artist’s solo exhibition “Vicissitude of Things.” Provided by the museum

In an ambitious feat, Shin Sang-ho, 67, a pioneer of Korea’s fine-art ceramics scene for decades, is simultaneously holding three solo exhibitions - one in a museum and two in commercial galleries.

Ceramics are often described as the art of earth and fire. But for many people, the word merely conjures up images of containers.

Shin has made efforts to break this prejudice, however, widening his horizons from pottery for practical use to ceramic sculptures and flat works he calls “fired paintings.”

His solo show “Vicissitude of Things” is currently at the museum.

“I have changed to survive,” Shin continued. “Change is the need of the times.”

Now, the artist focuses on installations, which he creates by combining ceramics and various objects he has collected for five decades in flea markets worldwide. 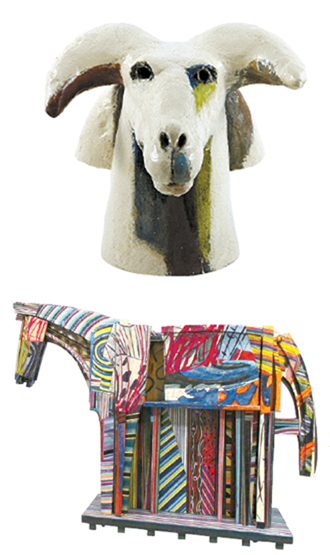 Shin’s ceramic sculptures are on display at the Lee Hwaik Gallery, above, and at Gallery Yeh, below. Provided by the galleries

“Every Saturday morning, I go to the flea markets near Cheonggye Stream [in central Seoul] to find objects that attract me,” Shin said. “They range from machines once used in factories to old pottery and doors used in homes. I like objects that tell me many things - history and time. They inspire me.”

The Kumho exhibition features Shin’s latest installations. They include “Schism,” which he completed by adding his own ceramic frames to glass panels with bullet marks that he bought at a flea market.

Another series of Shin’s works, “Surface ‘n Beyond,” is displayed on the museum’s second floor. The pieces, combinations of old window frames and Shin’s “fired paintings,” could remind viewers of traditional Korean sliding paper doors with geometric frames, or abstract paintings.

“For a while, I’ll concentrate on the ‘Surface ‘n Beyond series,’” Shin said.

“As I have entered another new stage now, it’s time to look back on my past works,” he added, explaining why he holds three solo show at the same time - a rarity among local artists.

Elsewhere, Shin presents his colorful ceramic sculptures of animals, which he focused on around 1990, at Gallery Yeh in southern Seoul. And in Lee Hwaik Gallery, which is in the art zone east of Gyeongbok Palace, Shin shows a range of works, including his animal sculptures and pieces from the latest “Surface ‘n Beyond” series. 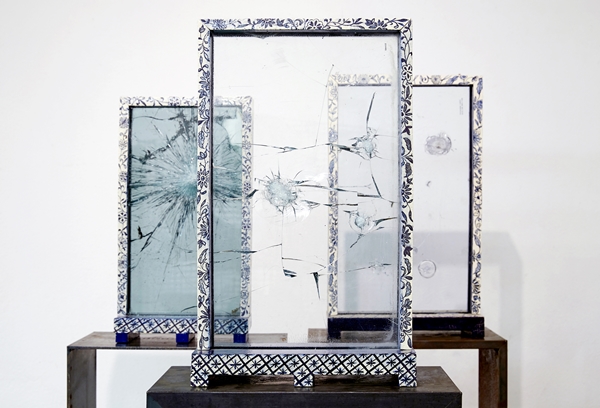 Shin completed “Schism,” which is now on display at the Kumho Museum of Art, by adding his own ceramic frames to glass panels with bullet marks that he bought at a flea market.