Hanbok, or traditional Korean dress, costumes that models from participating countries will wear at the upcoming Incheon Asian Games have ignited a debate about how far modernizing hanbok should go. [NEWSIS]

It’s long been customary for brides to wear hanbok, or the traditional Korean dress, at their wedding, and for children to don it during Chuseok or Lunar New Year. Yet much of the hanbok people put on these days is not all that authentic.

A traditional hanbok for women usually consists of a jeogori, or an upper garment with long, wide sleeves, and a skirt that balloons out and hits the ankle.

But hanbok is increasingly being given a modern spin, with options such as strapless bridal outfits without the jeogori and children’s styles made of London’s Liberty fabrics becoming more prevalent.

Hanbok has been unexpectedly thrust into the limelight in recent years, industry insiders say, mostly thanks to President Park Geun-hye, who often wears the traditional dress on important occasions at home and abroad, such as at her inauguration ceremony and during several high-profile state visits.

Attempts to give hanbok an up-to-date twist and bring it closer to people’s daily lives have increased as a result, inspiring a debate on just how far Korea should go to modernize its traditional costume.

Critics balk at the idea of hanbok without the jeogori, saying that Korean women in the past would never have strutted down the street without their shoulders covered.

But supporters say that while it’s a personal choice to love or hate contemporary hanbok, modernizing it can only be a positive thing as it revitalizes the hanbok industry and is more appealing for consumers.

How far is too far

Yim Ji-hye, a bride-to-be, is critical of modernized hanbok.

She describes her recent experience perusing hanbok stores to find an outfit for her special day “quite a culture shock.”

“The shops showed me pieces that would suit my skin color, and a lot of them were significantly modified versions,” the 32-year-old dentist said.

“I thought to myself, ‘Why would anyone want to wear that? Who would wear that?’ The modified hanbok is not Western, and it’s not Korean either. It seemed to me that it’s just neither this nor that.” 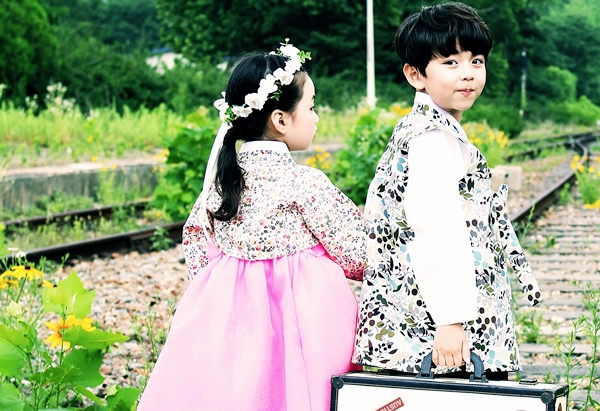 The so-called North European-style hanbok first sold through blogs, but during Chuseok last week, even large retailers jumped on the bandwagon. Provided by E-mart

The versions Yim saw included strapless or sleeveless hanbok, and she also spotted styles where the skirt was knee-length or where the cut was too slim to qualify as hanbok.

As Yim is having one wedding ceremony in Korea and another in the United States, where her fiance is based and where she will be living, wearing hanbok means incorporating tradition into her big day.

“I think there is a reason for calling a traditional Korean dress ‘traditional.’ The modified versions I saw didn’t display anything ‘traditional,’?” she said.

“Even if I were buying hanbok just to keep it for myself, not necessarily for a wedding, I would choose something traditional, not modified.”

Yet the bold, experimental designs Yim saw are exactly what the Korean government - or at least the Hanbok Advancement Center it launched in June - is hoping to encourage.

“Hanbok’s variety in terms of design is too limited to appeal to today’s consumers, who have such complex individual tastes,” said Suh Young-hee, the center’s artistic director.

“In the world of fashion, there are numerous options depending on preferences, purposes and tastes. It should be the same for hanbok. Only then will it enter people’s hearts.”

In that sense, the Hanbok Advancement Center supports the so-called “Liberty hanbok trend.”

These ads were in reference to children’s hanbok that uses patterns from Northern European or Nordic countries such as Sweden, Norway, Denmark, Finland and Iceland. Design from this part of the world are popular among Korean mothers these days.

Northern European hanbok is a variation on the Liberty hanbok, which first caught the eye of fashion-sensitive Korean moms on personal blogs in 2012.

Although the Liberty hanbok is now sold at online marketplace like Gmarket or large retailers like E-Mart, Han Su-yeon, 34, was one of the first to sell it on her blog.

Today, Han is the CEO of the flourishing online business Yeonjae Hanbok, which sells and leases hanbok.

“I was just looking to make a special outfit for my daughter’s first birthday,” Han recollected.

It is traditional in Korea to buy hanbok for a child’s first birthday.

“I made hanbok using Liberty of London fabric and posted on my blog - that was in March 2012,” Han said.

“To my surprise, so many people showed interest, asking if they could buy it. That’s how it all began. I started selling Liberty hanbok from May of that year.”

Han, a former human resources manager, has absolutely no background in design. But she quit her former job and is now fully dedicated to the hanbok business, claiming to have studied the attempts made to modernize Korea’s traditional dress.

“My customers keep looking for something special, something different for their children - just like me on my daughter’s first birthday,” she said. “That is the big tide here and we can’t really change that, can we?”

When asked how she would counteract criticism that says adorning children with Liberty hanbok only adds to their confusion as to what hanbok traditionally looks like, Han said she understands this point of view but believes Korean mothers’ demand for unique designs will likely continue.

“I also think hanbok has so much potential and a place in everyday life, and it isn’t fair if conservative people limit the possibilities,” Han said.

When asked if she is planning to design a new type of hanbok, she said yes, but she declined to give further details, saying it’s a “business secret.”

Suh, of the Hanbok Advancement Center, agrees with Han.

“Liberty hanbok is just a small fashion scandal that will pave the way for further experiments,” she said.

“Perhaps another fabric will replace Liberty of London and become a trend. If people can feel closer to hanbok through these trends, it is something [that we believe is ideal].”

Further fueling the debate about how far we should go in overhauling Korea’s traditional dress was the unveiling of hanbok costumes to be worn during the Asian Games’ opening and closing ceremonies.

The sports event is set to kick off its two-week run on Friday. 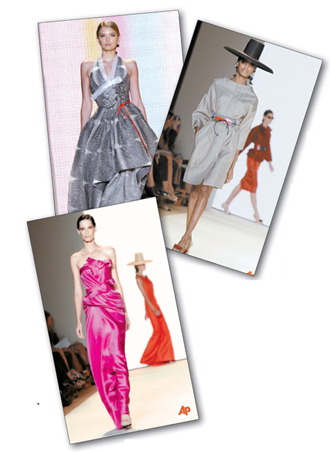 Hanbok has been an inspiration for many designers, including Carolina Herrera, as seen in her springsummer 2011 collection. [AP/NEWSIS]

The costumes are made of hanji, or traditional Korean mulberry paper, but “traditional” is perhaps the last word that comes to people’s mind when they see the outfits.

The designer did away with the jeogori - nothing unusual in today’s modernization attempts of hanbok, some may say - and added white arm warmers and oversized flowers on the skirt and headpiece.

“We blended the beauty of hanbok with the corset of the West,” designer Rhee You-sook said at the press conference on Aug. 27.

Reactions to the design were varied.

“It lacks class,” said Lee Hye-soon, designer and CEO of the hanbok brand Damyeon. “It’s not a matter of whether or not it’s beautiful or a personal taste. A dress is meant to show one’s class and dignity.”

Lee said hanbok has changed with the times, depending on politics, culture, climate and religion, but that not once in Korea’s history have women gone without the jeogori.

And it’s not as if Lee does not support the modernization of hanbok or is not aware that the costumes are for catching people’s attention.

Besides the fashion show for the G-20 Summit in 2010 and the Corea Image Communication Institute’s annual discussion forum, she has also designed for Korean period movies such as “Ssang-hwa-jeom” and “Scandal” - which are both known for their steamy love scenes.

Lee, who’s worn hanbok every day for the past 20 years, says the styles she wears are neither strapless nor wildly contemporary, but that they are also altered, insinuating that modification doesn’t have to be too bold or experimental.

“There is a proportion that people today are used to. The hanbok I wear is modified to be in line with the proportion, in terms of the length and width and so on.

“Going without jeogori is OK in personal collections, but not at a global event like the Asian Games,” she said.

Park Sul-nyeo, another veteran hanbok designer who dressed actress Amanda Seyfried, pianist George Winston and singer Paul Potts, also told a Korean news organization that she was surprised at the costume. Park pointed out that she is all for modification but is against losing the traditional elements of hanbok altogether.

Another hanbok designer, who wished to remain anonymous, said, “Hanji is a beautiful material, but I don’t understand why they made hanbok with it.” The designer also criticized the adoption of a corset motif, saying “Korean palaces just cannot be Western castles ... A crossover doesn’t have to be that literal.”

The debate goes on

In reference to such criticism, an official with the Asian Games organizing committee, said “the costumes focus on traditionalism of hanbok and the flowers that represent each participating country,” adding that “it has been highly received at home and abroad.”

Other supporters say lines shouldn’t be drawn regarding how far hanbok should be modernized.

“We should stay away from instant reactions to the costumes like ‘I hate it,’ ‘It’s too revealing’ and so on,” one industry expert says.

“Plus, if they were going for sexy,” the expert added, “I think they could’ve shown more skin.”

Modified hanbok is nothing new in Korea. Such a movement has been led by renowned hanbok designer Lee Young Hee, as seen in her show last December. [JoongAng Ilbo]

Suh, of the Hanbok Advancement Center, also says that the spirit of beopgo changsin (learn from what’s old, create what’s new) is needed in hanbok.

“Even looking at the history of hanbok, it’s not so simple,” she said. “Hanbok has had numerous forms - more than one can imagine, and has always transformed with time. In fact, the reason for the current crisis of hanbok is that hanbok hasn’t been able to change with time and breathe with the public.”

Suh says there should be no line that hanbok can’t cross and debates like these are healthy.

“I just hope people will view hanbok from various perspectives,” she explained. “Having a debate is also healthy. After all, there is interest and affection, I think.”

In the meantime, Yim Ji-hye is happy with the choice she made for her wedding. She picked a relatively traditional design - a violet top and a red skirt with embroidered flower patterns on the cuff. She will be walking down the aisle on Jan. 10.