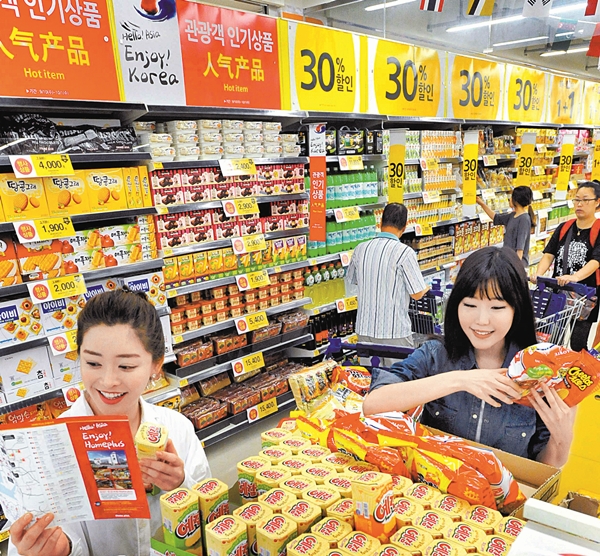 Ahead of the Incheon Asian Games on Friday, Homeplus has equipped some of its branches, including this one in Cheongna, Incheon, with signs in Chinese as visitors from that country are expected to surge. Provided by the company

Local retail chains are gearing up to target Chinese tourists who are expected to visit Korea for the 2014 Incheon Asian Games and China’s National Day.

The sporting event will last until Oct. 4 and the National Day holiday period lasts from Oct. 1 through 7. The Korea Tourism Organization estimated that a total of 160,000 Chinese tourists will make their way to Korea between Friday and Oct. 7.

And retailers are ready to take advantage of the opportunity.

Lotte Department Store is set to begin a sales event exclusively for Chinese visitors from today through Sunday.

The department store’s main branch in Sogong-dong, central Seoul, will sell 32 fashion, cosmetic and accessory brands that are especially popular among Chinese shoppers in a designated section on the ninth floor.

“This is the first time we have designated a certain section of the department store for Chinese shoppers,” said a public relations manager for the retail chain. “Since Chinese shoppers have shown a particular taste for some designer brands, we thought it would be good to set up a booth for them.”

Lotte Duty Free Shop will hold a sweepstakes event for its Chinese shoppers beginning today and lasting until Nov. 15, giving a ticket to each one who makes a purchase at the store. First prize is a Lotte Castle apartment in Shenyang, China, and second is Hyundai Motor’s ix25. Other prizes include televisions and hotel vouchers.

Lotte said that it will double its number of Chinese-speaking staff members for the holiday and Asian Games period.

The country’s largest discount chain, E-Mart, will give up to 40 percent off on products preferred by Chinese buyers between Friday and Oct. 1. Goods on sale will include electric rice cookers, red pepper paste and milk powder. E-Mart will also give a 5,000 won ($4.82) discount to Chinese shoppers who spend more than 80,000 won on their China UnionPay card.

The number of Chinese tourists to Korea per year has quadrupled since 2007, and retailers have targeted the new customer base amid shrinking local demand.