Every seat in the conference room at the Intercontinental Hotel in Samseong-dong, southern Seoul, was occupied yesterday, mostly by young males with thick-rimmed glasses who were there to attend Samsung Electronics’ first open-source conference.

“We were worried when we planned this conference,” said Lee Hyo-gun, senior vice president of Samsung Electronics in charge of software development, including the company’s operating system Tizen. “But I’m glad so many people have shown an interest in open source.”

In greeting the audience, Lee said that without open source, Samsung wouldn’t have been able to come so far in terms of software development.

“We should have shared our experience with those outside of the company and held such events long ago,” he added.

A major shift is taking place at the nation’s biggest tech company.

Samsung, which once relied on hardware to market its products, has started to focus more on software development.

The changes have become more evident when rumors started circulating that Samsung was pushing the use of its own operating system, Tizen, in its gadgets released earlier this year. The tech giant’s first smartwatch released last year, the Galaxy Gear, ran on Android’s operating system. But the two versions launched since the Mobile World Congress was held in February run on Tizen, and Samsung also debuted its first smartphone that uses Tizen, called Samsung Z, in the second half.

The company dropped the “Galaxy” from the smartwatch series and now calls it Gear, because the Galaxy name is used for all of its products that run on Android.

So why the sudden change of operating system and heightened interest in open source?

The Korean tech company’s Achilles’ heel has always been software development. Although Samsung dominates the global smartphone market, the software used on its phones is largely Google’s Android. 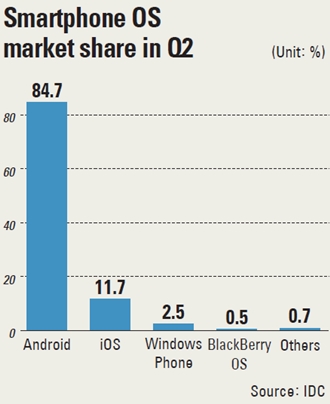 Tizen’s market share is reportedly about 0.34 percent, whereas Android’s share is nearly 85 percent and Apple’s iOS has nearly 12 percent, according to IT market researcher IDC.

The company has been trying to expand the reach of its operating system after losing its competitive edge in the smartphone market. And in order to survive in the rapidly changing ICT industry, it must be capable of creating its own system - not only for phones but also in the smart-home market.

Samsung’s smartphone success has recently weakened due to the sudden rise of Chinese competitors including Xiaomi, Lenovo and Huawei. But China isn’t the only country eating away at the Korean tech company’s market share. Indian manufacturer Micromax is showing strong growth with sales of its entry-level smartphones, while in Africa, local vendors such as Evertek, VMK and PlirisMobile are emerging as competition.

According to experts, although companies like Xiaomi and Micromax were only founded in 2010, they found success quickly due to the open-source Android system. Consumers can now purchase a smartphone that has the same functions as a Samsung phone at a lower price.

The quality differences that have kept Samsung and Apple ahead of their competitors are narrowing and Samsung could easily be replaced, as has happened to other global tech companies such as Nokia and Motorola, which had the upper hand in the 2G mobile phone market.

Hardware is no longer a factor that can keep Samsung in the lead.

Experts note that for Samsung to solidify its position, the key is to create a Samsung-centered ecosystem.

If Tizen is used in more smartphones and other appliances, Samsung’s dependency on Google will shrink, and it will secure new revenue sources and solidify the loyalty of its customers. It will also reduce Samsung’s financial burden.

“Today, one of the most important definitions of open source is it’s a strategy,” said Jim Zemlin, executive director at the tech consortium Linux Foundation, during a keynote speech at the Samsung conference yesterday.

He said the goal for companies with open source is to improve profitability and market share.

“[Open share] cheaper and faster,” Zemlin said. “You can save $2,000 per code and focus on creating new codes.”

He added that open source allows a company to improve its internal sourcing by connecting its products.

The progress toward creating a digital ecosystem with the Samsung brand was shown at IFA, held earlier this month in Berlin. The company introduced electronics that could be controlled using its smartphones, including TVs and refrigerators.

Earlier this year, Samsung Electronics said that it began developing Tizen to apply it to a variety of electronic equipment that would then be connected, which is known as the Internet of Things (IoT).

The report said that consumers are embracing IoT in their homes, cars and in other aspects of their daily lives, and that individuals are developing a high affinity for full-time connectivity.