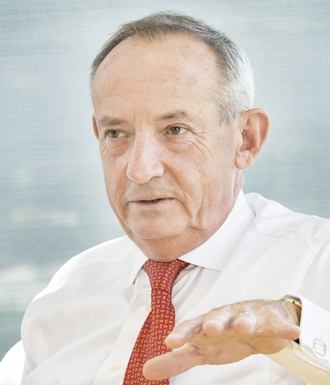 Yvo de Boer, director general of the Global Green Growth Institute, in his office on Sept. 5 in central Seoul. By Park Sang-moon

The United Nations Climate Summit, where more than 100 world leaders will gather in New York later this month, “is critical in terms of getting clear statements from countries on their willingness to act [on climate change],” said Yvo de Boer, the director general of the Seoul-based Global Green Growth Institute (GGGI).

“Korea needs to decide what it is going to say in New York,” de Boer said on Sept. 5, when he sat down for an interview with the Korea JoongAng Daily at GGGI’s headquarters in Jeong-dong, central Seoul. “And, of course, UN Secretary General Ban Ki-moon, being Korean, will especially expect a strong, ambitious and positive signal from his home country.”

A number of state and business leaders, including U.S. President Barack Obama, as well as other environmental experts are expected to attend the UN Climate Summit. It will be hosted by Ban on Sept. 23, and is intended to pave the way for the UN’s Paris climate change conference in 2015.

A new agreement is due to be ratified in Paris next year and will come into effect in 2020. It is expected to replace the Kyoto Protocol as the world’s most important treaty on climate change and conceivably bind all countries by the commitment to reduce their greenhouse gas emissions and reform their energy systems.

Earlier this month, de Boer led discussions at the Seoul Climate-Energy Conference, attended by senior South Korean government officials, world-renowned scholars, politicians and business leaders, to address the tasks that must be dealt with at the summit.

“There has just been a very difficult debate in Korea about emission trading, should Korea enter into emission trading or not, how ambitious is the target going to be, and what is going to be the cost to industry,” de Boer said. “That has been a very active debate because Korean companies are very concerned about their international competitiveness, and they are concerned about how emission trading and the price on carbon can have a potentially negative impact upon their competitive position internationally.”

The Korean government plans to start a carbon-emission trading system next year but announced this month it will postpone instating its low-carbon vehicle cooperative fund system until the end of 2020 following strong protest by the automotive industry.

He was appointed to head the GGGI in April for a four-year term.

“The problem with climate change is that it is a long-term issue, and the effects of climate change occur quite gradually, which gives people the feeling that they can afford to wait until some climate disaster happens,” he pointed out.

The GGGI is currently working on 32 programs in 20 countries to help their economic growth be more environmentally friendly.

Q. What is the significance of the UN Climate Summit in New York?

A. There are two important aspects to the summit. One is that world leaders will be coming together and indicating, hopefully, what they plan to do to address climate change and what they want out of the Paris agreement [in 2015].

What are some pending issues to be dealt with at the Climate Summit?

One of the pending issues is whether all countries will be willing to put forward ambitious commitments in Paris a year later. … Another important pending issue is around finance - how are developing countries going to be supported financially to help them act on climate change? As you know, less than a year ago, the Green Climate Fund [GCF] was established here in Korea in Songdo.

That Green Climate Fund is supposed to be the main financial mechanism that countries use in order to provide developing nations with financial support to address climate change. And one of the questions is how much money countries are going to put into the GCF and when will they be making the contributions.

Do you think concrete progress will be made at the 2015 Paris negotiations?

I hope that negotiation will result in three things. First of all, I hope that in Paris all countries will commit to action on climate change, and that they will write that action into national law in the same way Korea wrote the emission-trading scheme into national law. … Secondly, I hope for an agreement to regularly review whether the commitments we have are enough and whether they are being implemented. The third thing I hope would be agreed is that there will also be a periodic review of how much financial support developing countries need and how that support is going to be provided.

Isn’t it the role of the GCF to generate funding?

What sort of vision should Korea have on an emissions-trading system?

I think the question is: How can emissions trading help Korea get the economy it wants to have instead of the economy it used to have? [President Park Geun-hye] talks a lot about the creative economy. The creative economy, for me, is all about creating new kinds of modern jobs that are linked with modern technology, modern services, intelligent applications and theta vehicles. I believe that a price on carbon-emission trading will be a big price incentive in the creation of that kind of innovation. If the price of your electricity goes up, you will be more interested in solar energy, efficient vehicles and applications for energy efficiency. …

If the price of carbon goes up there is potentially a massive opportunity for companies like LG, Samsung and automobile manufacturers to produce new products that allow people to cope with a higher energy price

What is your vision for the climate change issue and raising public awareness of it?

My personal sense is that humanity [is] heading in a very, very dangerous direction, not only because of climate change but because of issues around energy security, food and water scarcity, scarcity of natural resources and increasing prices of natural resources. Those are some major pressures we are facing at a time when the global population is continuing to grow… [and is] consuming more and more as a result of becoming richer. …

I don’t believe that an emotional appeal is enough to get people to change their lifestyles, their way of living. I really think that we need to create economic incentives to drive change. One of the central ways to drive change is through pricing carbon properly. We are at that moment … where the damage caused to the environment as a result of producing something is not calculated into the price of a product. …

If you were to include the environmental cost, then on average, the profits of many sectors would drop by about 40 percent. If food producers had to fully include the cost of the damage that they cause in the price of food, then food prices on average will go up by 250 percent.