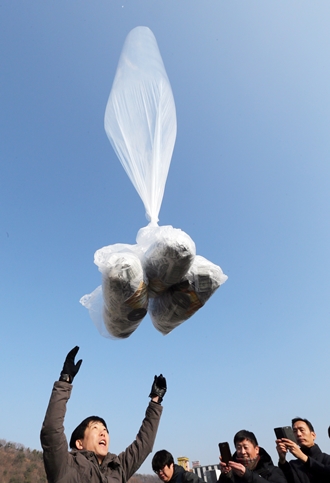 Fighters for a Free North Korea and the Human Rights Foundation members fly leaflets denouncing the regime on Jan. 15, in Paju. By Kim Seong-ryong

North Korea’s highest decision-making body has issued a direct message to the South’s presidential office, stating that it will sit down for inter-Korean talks only if the South stops sending anti-Pyongyang propaganda leaflets.

A ministry official said yesterday that the messages were directed to the National Security Office of the Blue House. In the messages, the North said it would only attend the high-level talks if the South stopped sending the leaflets.

According to the official, the Blue House replied to the North on Sunday after the initial request was made.

The Blue House told Pyongyang in a message that the South respected a previous pact in which the two Koreas had agreed to stop slandering each other, the official said.

Seoul also stressed that it could not restrict the citizens’ freedom of speech without proper legal grounds, he added.

“The North’s other message on Monday reiterated its earlier position, so we have no plan to respond.”

On Saturday, the North issued another public statement, demanding the South stop all “hostile acts,” including the dissemination of propaganda, threatening to attack the origin of the provocation and its leadership if the flyers continued to arrive.

While the South Korean government and the military have halted propaganda activities against the North, South Korean rights groups continue to fly balloons containing the leaflets condemning the North Korean regime from the border areas.

The North claimed that the South Korean government was also responsible for sending the leaflets, though Seoul has denied that accusation.

The North made a similar demand last week to the South Korean Unification Ministry. According to the ministry, it proposed to North Korea on Thursday to hold a meeting this week to discuss issues associated with travel and the Internet connection at the Kaesong Industrial Complex. The North replied on Saturday that it would only agree to talks when the South stopped sending propaganda.

Pyongyang’s abrupt and repeated demands on the flyers appear to be linked to its tactic of gaining higher ground in future talks, the Unification Ministry official said. “They also appear to be picking on an issue that we cannot accept in order to blame us for not resuming talks.”

The ministry said it replied to the North on Sunday, saying it regretted that Pyongyang had presented an issue irrelevant to the Kaesong Industrial Complex as a precondition for talks. It also reminded North Korea that the two countries had previously agreed that the factory zone should be operated despite political tensions.

It has been one year since the Kaesong Industrial Complex resumed operations, and the Unification Ministry said it would continue talking to the North to improve the situation and push forward its plan to globalize the project. To this end, the ministry opened a foreign investment center on Friday in Seoul.

The Kaesong Industrial Complex was established with 15 companies in June 2004, the result of an agreement between South Korea’s Hyundai Asan and North Korea in 2000.

Production first started in December that year, and although the inter-Korean economic experiment has steadily expanded since, political tensions between the two nations have often decided its course.

After North Korea torpedoed and sank the ROKS Cheonan, the Lee Myung-bak administration announced a series of sanctions against Pyongyang on May 24, 2010, effectively barring new investment in the Kaesong Industrial Complex.

In April 2013, the North withdrew its workers and banned South Korean managers from entering the complex amid heightened tensions between the two. After being shuttered for 166 days, the Kaesong Industrial Complex was reopened on Sept. 16, 2013.

Despite its near-death experience, the last surviving inter-Korean joint venture has almost returned to normalcy, the government said. According to the Unification Ministry, there are 123 companies operating in Kaesong as of June, up from 122 in March 2013.

While the South Korean government said the complex’s operation had nearly normalized, companies that operate factories in Kaesong urged the government to lift the May 24 investment ban. The Corporate Association of Kaesong Industrial Complex, a lobbying group of South Korean tenants, said that without new investment, their businesses would be jeopardized.

“Due to the May 24 measures, no new investment has been made in Kaesong,” it said. “We can only replace dated facilities within tight restrictions.”

The businessmen said they agreed that the investment ban was necessary when it was adopted, but four years had passed since then. “In order to support President Park Geun-hye’s initiative for North Korea, it must be reconsidered,” the association said.

It added that factories were about 18,000 workers short and a new plan was needed to resolve the problem.