Opposition gets tongue-lashing from president

Opposition gets tongue-lashing from president 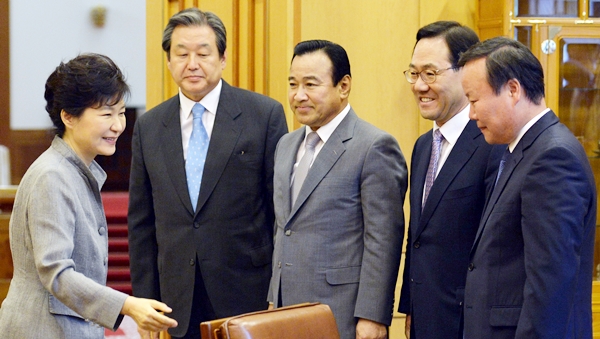 President Park Geun-hye, left, meets with leaders of the ruling Saenuri Party yesterday at the Blue House. In their meeting, Park urged the party’s cooperation in normalizing the workings of the National Assembly to pass bills needed to revive the economy. [NEWSIS]

President Park Geun-hye said yesterday that lawmakers who fail to perform should give their salaries back to taxpayers while scolding the National Assembly for failing to reach a consensus not only on the special bill to investigate the sinking of the ferry Sewol but other bills that have been held hostage.

“Since lawmakers’ annual allowances come from tax money from the people, [they] have a duty to fulfill their responsibilities to them,” she said in a cabinet meeting in the morning. “If they fail to fulfill their duties, they should return the allowances.”

Her remarks were clearly targeted at the main opposition New Politics Alliance for Democracy (NPAD), which has refused to pass any other bills until the ruling Saenuri Party gives in to its demands on the Sewol bill.

The NPAD lashed back.

“The president’s ignoring of the National Assembly is over the line,” said Yoo Ki-hong, the party spokesman, in a briefing. “We at the NPAD do not demand that the president return her salary, even though she’s not keeping her campaign promises.”

The president also objected to the demand from the relatives of the victims of the Sewol disaster that a fact-finding committee be granted the authority to investigate and indict suspects in the proposed new law. That is the sticking point that has kept an agreement from being reached between the NPAD and the Saenuri.

“Some say that the president should decide on the argument that the fact-finding committee be given investigative authority and indictment rights,” said Park. “But that will shake the basis of the separation of the three powers [legal, administrative and judicial] and is not to be determined by the president.”

The Saenuri has been unrelenting in its stand that giving such powers to the committee would be unconstitutional, a stance shared with the president.

“If such basic principles are broken, the rule of law and judicial system will be destroyed and will subsequently eat away at the foundation of the Republic of Korea, eventually leaving endless enmity and conflict,” the president added.

In an unprecedented move, the president spoke about the insulting comments made about her.

“Profane comments about a president who represents the people are going over the line,” she said. “It is an insult to the people and could drag down the nation’s status and deal a blow to the country’s diplomatic relations. Such remarks from the political sphere, which is supposed to be most exemplary, could disgust the younger generation and deduct from the status of the National Assembly.”

The president was almost certainly responding to Rep. Sul Hoon of the NPAD, who stirred controversy last Friday by mentioning to fellow lawmakers rumors about President Park’s love life that were printed in a Japanese newspaper.

“I still wonder what President Park was doing for the seven hours [between the point when the Sewol ferry sank and when she made a public appearance to discuss emergency measures] at the Blue House,” he said.

“I will be more blunt. I think the statement that the president was spending time with her lover is a lie. I don’t think it is true. The problem is that it gets more serious if it isn’t.”

The claim that the president was missing for seven hours on the day the Sewol sank and was spending time with a paramour, whose existence the Blue House has persistently denied, spread in early July after the president’s chief of staff, Kim Ki-choon, said at an Assembly hearing that he did not know the whereabouts of the president on the day of the disaster.

Meanwhile, leaders of the Saenuri Party visited the Blue House for a meeting with the president later in the afternoon yesterday. The urgently organized gathering was not disclosed to the Blue House press until after lunchtime.

The president asked the ruling party to “spearhead” a move to end the paralysis at the National Assembly.

“I feel frustrated seeing the people constantly hope the Assembly will pass bills affecting their livelihoods when the situation isn’t improving,” Park said. “That’s why I asked to meet with you.”