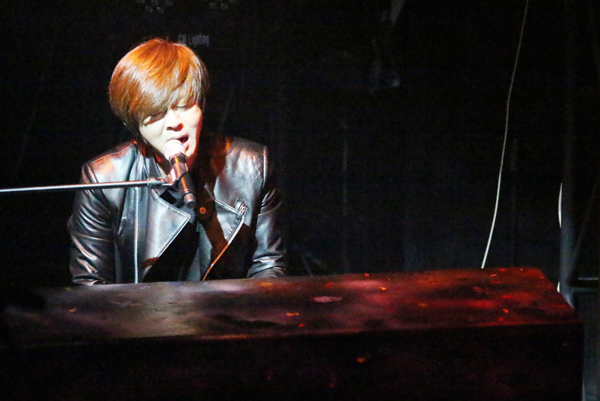 Yoon Do-hyun, the lead vocalist of the rock band YB, sings in a press conference to promote his new solo album. Provided by DEE Company

In a country where young, petite K-pop stars top local music charts, the lead vocalist of rock band YB stands out for building up a solid fan base that puts him under a spotlight no teen idol can match.

Two decades since his 1994 debut, 42-year-old Yoon Do-hyun is still winning the hearts of male and female fans from all age groups with rock songs that have made him one of the most sought-after acts at college festivals.

Wherever Yoon appears with a microphone, crowds go wild as they sing along to his greatest hits in unison.

But hidden underneath the masculine, robust image Yoon portrays on stage with his four other band members is a sentimental solo artist who says he composes his songs with an acoustic guitar and a piano - contrasting with fellow rockers who normally rely on electronic devices to create music.

“I’ve always had a sense of folk music in me,” Yoon said during a press conference Tuesday in Mapo District, western Seoul, which was held to promote his newly launched solo album.

“It just doesn’t reflect through YB because, as a member of the group, I have to consider the band’s artistic identity.”

The performer’s new album, “Singing Yoon Do Hyun,” was released on Tuesday, five years after his last solo collection “Harmony” debuted in 2009.

“Singing” is composed of five songs, two of which are title tracks: “Much as the Time (We Loved Each Other)” and “The Sound of Rain.”

“I’ve always had a different set of emotions, and a list of songs I wrote that were waiting to be shown to the world,” Yoon said.

“They were all based on the folk-rock genre, which was something I couldn’t combine with YB.”

The music Yoon pursues in YB is “for stage performances,” he explained, whereas his latest solo album is a laid-back, soothing playlist of songs suitable for just this time of year.

During the press conference, Yoon took to the stage to sing three tracks from the album, as if to prove to the guest journalists that the album’s dominant emotions - dejection and remorse - are better shown than explained.

As a thin layer of dry ice fog embraced the pitch-dark press room, a screen projected on the back wall of the stage showed raindrops falling from the night sky. A ray of light beamed onto the center of the stage, focusing everyone’s attention on the main man, Yoon.

Dressed in black from head to toe, the singer strung his classic light brown guitar as he impersonated a wretched man longing for an ex-girlfriend, according to the lyrics of one of the title tracks, “The Sound of Rain.”

His wistful eyes peeked through his lopsided bangs, as if to hide his true emotions about a person he’s no longer with.

When asked who the song was inspired by during a question and answer session after the live performance, Yoon hesitated, and then rushed to answer.

“I write my lyrics through stories I pick up from my friends, movies or books,” he said.

“I’m serious, really. I don’t even remember my ex-girlfriends.”

Yoon is married and has an 8-year-old daughter.