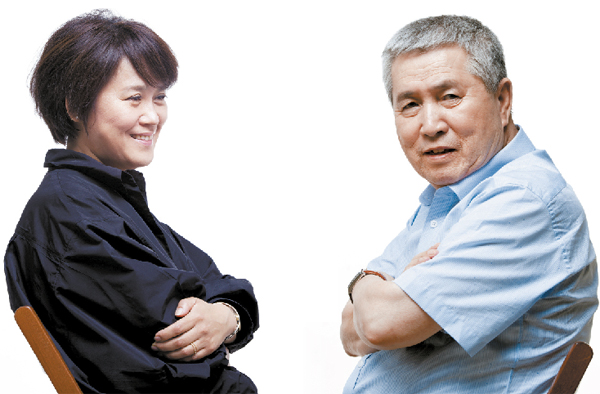 Shim Jae-myung is head of Myung Film, the production company behind box office hits like “Joint Security Area/ JSA” (2000) and “Forever the Moment” (2007). Director Im Kwon-taek teamed up with Shim to make his 102nd film, “Revivre.” By Jeon Ho-sung

Several talented filmmakers in Korea are acknowledged as “virtuosos” or “masters,” but none fit these descriptions as faithfully as renowned director Im Kwon-taek, a 78-year-old who has just completed his 102nd film.

Im’s latest feature is titled “Revivre” for international audiences, or “Hwajang” in Korean, which means both “make up” and “cremation.”

The movie is based on novelist Kim Hoon’s short story of the same name, and as is suggested by its title, the film tells the story of people: their lives, loves, agonies and deaths. It closely follows the psychological state of Sang-moo, an executive at a cosmetic company played by experienced actor Ahn Sung-ki.

Sang-moo devotes his off-work hours to faithfully nursing his wife (Kim Ho-jung) who is dying of brain cancer. But one day, his tiresome yet peaceful days are torn to pieces when he meets alluring marketing newcomer Eun-joo (Kim Qyu-ri).

Im Kwon-taek’s latest feature, “Revivre,” is based on novelist Kim Hoon’s novel of the same title, which looks frankly at the agonizing lives of a middle-aged married couple where the wife is dying of a brain tumor. The film questions the meaning of life, death and love all at once. It has been invited to international film festivals such as the Toronto International Film Festival and Venice International Film Festival. [JoongAng Sunday]

It’s a tough story to tell, but thanks to Lim’s skill and outstanding performances by experienced actors Ahn and Kim Ho-jung, the film has already won global recognition by being invited to the prestigious Venice, Toronto and Vancouver international film festivals.

Lim is no stranger to attention, so getting picked up by the film festivals was not unexpected.

But his collaboration with Myung Film, one of the most capable production companies in Korea, came as a surprise.

Myung Film has produced box office hits like “Architect 101,” “Leafie, a Hen Into the Wild” and “Forever the Moment,” all of which were praised for taking an unusual approach to ordinary subject matters.

When it was announced that Lim, a specialist in artsy movies over his 50-year career, would work with Myung Film, people assumed that the finished work would appeal to a broad audience.

Its official domestic release date hasn’t been confirmed yet, but “Revivre” is already off to a good start. It held its world premiere on Sept. 3 at the 71th Venice International Film Festival. Although it was invited for the “Out of Competition” sector, Im went shoulder-to-shoulder with international film masters like Lars von Trier of “Dancer in the Dark” (2000) and Gabriele Salvatores of “Mediterraneo” (1991).

Just in time to celebrate a line of invitations from prestigious film events, the JoongAng Sunday, an affiliate of the Korea JoongAng Daily, sat down with the maverick and Shim Jae-myung, head of Myung Film, last month to talk about making “Revivre.”


Q. Why did you ask Im Kwon-taek to direct the film?

A. Shim: As soon as I read the story, I was overwhelmed by the tenacious and persistent description of life, death and the human body. I instantly thought it would make a good movie, and as more details about it formed in my mind, I naturally thought of the director Im.
He was the perfect candidate to handle the weighty subjects of desire, hopelessness, life, death and the meaning of existence for a man in his 50s. It was a meaningful challenge for me, too, because it was a movie with adult themes that had a middle-aged man as the protagonist, which differs from everything I’ve done before.

Im, were you confident when you took up the offer to direct the film?

Im: The thing I’ve realized after making movies for such a long time is that the film reflects the time period the director has lived in and experienced. More specifically, if you are not aged and ripened enough, there is a limit to approaching different kinds of people in diverse perspectives and understanding them.

Now that I’m old enough, I kind of gathered up the nerve to take on the challenge. “Revivre” draws upon the shameful thoughts everybody collects in their minds but is afraid to share with the world. In the film, there is a patient who is withering away day by day, a husband who is watching his wife die, and a sparkling sense of youth that shines regardless of death.

Finally, there are those shameful thoughts everybody keeps in mind. If these ordinary ideas are reflected truthfully on screen, I thought [the film] would turn into something unlike anything I’ve made before.

Kim Hoon, the author of the original novel, is famous for writing fussy literary sentences, and “Revivre” realizes his signature style to its fullest. The depiction of the patient breaking down due to pain and the husband’s complex emotions while witnessing his wife deteriorating has been said to leave a huge impact on viewers. What was it like to bring those words onto the screen?

Im: There is a great amount of power in Kim Hoon’s sentences. I was very eager to wholly inspire the audience with the movie. I knew it wasn’t going to be easy, but when I got into the filming process, it was harder than I expected. I don’t think it was just because the story lacked a precisely divided introduction and conclusion, because I’ve made movies out of a story that had only three pages.

But, strangely, I felt ill for a whole month, as if I had been beaten by someone. It was the first time for me to go through something like this.

Shim: Before shooting I was very excited for no specific reason. I mean, I was about to work with a director that inspired me to get into the movie business. But once filming started, the excitement switched to agony. At one point I wondered if I had been too greedy trying to turn a 50-page story into a 100-minute feature film.

How did you feel when the movie was not nominated for the Cannes competitive sector?

I don’t feel disappointed that I missed the chance to go to Cannes or that I wasn’t awarded for the film, but when a movie gets invited to international film festivals there are a lot of positive consequences that benefit the production company such as the general public noticing the film, leading to profits. Also, it gets much easier to grab more theater screens and do promotional work. Of course I feel bad that I wasn’t able to do that for Shim.

In a strict hierarchical society like Korea’s, which extends to the movie industry here, it’s difficult for senior and junior filmmakers to work together. What was it like for you two to work together?

Im: Shim really stressed me out, but in a good way (laughs). There were several days when I didn’t feel quite right after I finished shooting. I wasn’t satisfied that my original intention was accurately reflected in the film. And just when I was thinking that to myself, Shim suggested editing the part.

Before “Revivre,” I had never allowed any modifications to be made to my movies, not even in a single cut. But for this, I felt that an objective point of view would be necessary. After revising the cuts, I told my crew that Shim could take over. Out of all the producers I have come across so far, Shim is by far the most objective and cool-headed. I understood why Myung Film has made so many successful movies to date.

Shim: As for me, I was making suggestions after days of contemplation. But I was thankful that Im gladly accepted my opinions. I think this was possible because of the indefinite amount of responsibility Lim feels toward his films, which is also why others wouldn’t dare suggest that he should make any changes.

Im, what do you think about people calling you the nation’s most renowned director?

Im: I don’t know what to do when people call me by that. I would be the most “renowned” director if a lot of people saw my movies. But since my films don’t sell well, it curtails investment from big companies. That’s part of the reason why I attempted to be overly ambitious with “Revivre.”

Filming 102 movies doesn’t mean I have gathered outstanding knowledge or that it guarantees a better movie. Every time I make a new movie, I just do my best, floundering to make the best of what I have.

What do you expect from Im’s latest movie?

Shim: Lim is roughly the only active filmmaker in Korea that has worked since the 1960s, whereas there are directors like Clint Eastwood, Woody Allen, Jean Luc Godard and Roman Polanski in other countries appearing at film festivals and interacting with the public on stage.

Lim is like a symbolic figure in Korea’s movie industry, but it is such an unfortunate reality that he isn’t considered an apt candidate for big company investments. I hope this movie will give more opportunities for veteran directors to attempt bigger challenges and endlessly interact with audiences. Commercial success is not at all what I want the most from “Revivre.”