KB Financial Group Chairman Lim Young-rok declined to resign and filed a lawsuit against the financial authorities on Tuesday night, declaring “total war” against the country’s two financial watchdogs - the Financial Services Commission (FSC) and the Financial Supervisory Service (FSS) - that penalized Lim with a three-month suspension for causing a boardroom feud.

It is the first lawsuit against both financial authorities ever filed by a financial group chairman.

While the government’s FSC oversees the country’s financial holding companies and securities firms, the privately operating FSS has full supervisory control over the operations of banks, insurers, savings banks and credit card companies.

In the lawsuit, Lim wrote that he wants to restore the tattered reputation of the group as well as his own by unveiling the truth regarding the internal conflict between the group and bank’s top management over changing the bank’s main computer system. Lim’s main conflict was with Lee Kun-ho, former president of the bank, who stepped down Sept. 4 after an FSS reprimand. 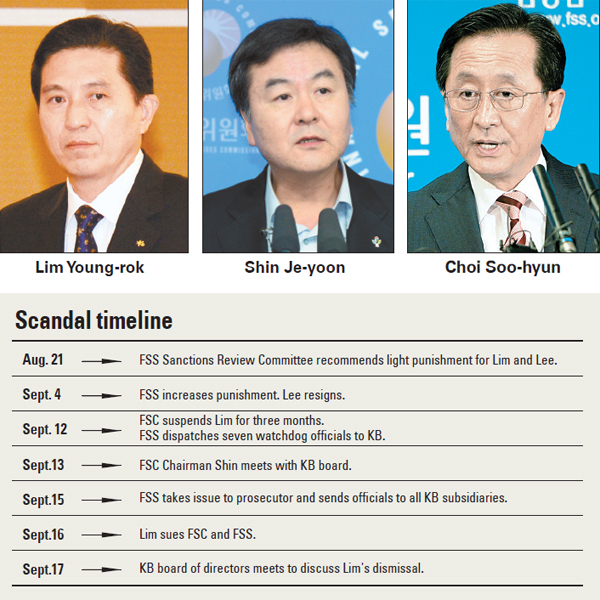 Lim said there was no illegal action equivalent to a crime at KB, as the FSS has said.

FSS Gov. Choi Soo-hyun said two weeks ago that during the process of switching its network system, top management of the holding company and the bank committed wrongdoings “as serious as crimes.” The FSS investigation found Lim was involved in writing false reports on the project that distorted the bank board’s decision process. The FSS accused four KB executives, including Lim, turning their cases over to the prosecutors.

Lim also applied for an injunction that would nullify the FSC’s suspension.

The FSC seemed quite surprised at Lim’s lawsuit.

“Some speculated there might be a legal dispute, but it was just a guess,” an FSC official said.

If the authorities lose, there may be new pressure on FSC Chairman Shin Je-yoon and FSS Governor Choi to resign.

KB’s board of directors gathered yesterday, but the nine members remain divided over dismissal of the chairman. The board is expected to hold a vote tomorrow.

What has led to such an unprecedented case is the way the authorities punish financial figures or institutions, which seems just for show.

Financial authorities in the United States and Europe strongly penalize institutions if they threaten the financial industry.

Financial authorities of advanced countries don’t normally intervene in daily decision-making processes, but they conduct tenacious and meticulous investigations for three to four years before imposing a fine.

Even in advanced countries, there are many financial institutions with no owner. Shareholders appoint chief executive officers. Because those institutions are so large and aggressive, financial authorities can’t just sit and watch if the appointed CEOs become despotic. U.S. authorities hand out tough punishments to deal with them.

It is a far different story in Korea. What Korean financial authorities are focused on is posturing. Authorities directly penalize minor and internal wrongdoings committed by individual employees. On the other hand, they see how the winds blow when it comes to punishing CEOs of financial groups, who are backed by political heavyweights.

Every five years when there is a transfer of government, en masse punishments on financial figures are meted out. Politics is a factor in almost every case where leaders of financial groups are punished.

KB Financial Group continues to be the target of financial authorities. Including Lim, the group’s five past chairmen were all punished for one reason or another.

Unlike the U.S. financial authorities, the Korean authorities give weaker punishment to institutions than to individuals.

Because leaders come and go, it is difficult to identify and change bad customs or structures at institutions.

“Such a backward supervisory role of the financial authorities has led the latest KB crisis to the worst-case scenario,” said Chung Sung-in, a professor at Hongik University.

Board of directors of financial institutions in advanced countries also keep top management under check. The boards are not there to be “yes men” to the chairmen.

Most of the board members represent shareholders. They can demand their rights before financial authorities get involved. In Korea, there frequently are secret promises between chairmen and board members.