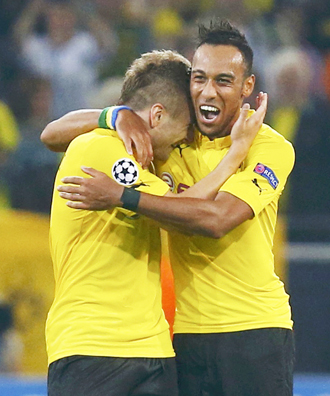 Dortmund, losing finalists in 2013, took control of Group D on three points with Galatasaray and Anderlecht drawing, 1-1, in Turkey in the other game in the section.

Italian forward Ciro Immobile, who until Tuesday had yet to score for Dortmund since joining in an 18 million euro ($23.33 million) move from Torino, gave the hosts a deserved lead on the stroke of halftime with a superb solo effort, as they controlled possession and set the pace for much of the first half.

Winger Pierre-Emerick Aubameyang, who terrorized the Arsenal defense with his speed and also hit the post, added another goal after the break as the Germans, missing several injured players, avenged last season’s home loss to the English side.

“We were brave, we were fast and we had everything we needed to win this game,” said Dortmund Coach Juergen Klopp. “I enjoyed it from the first minute to the last.”

Klopp said before the game that his team would try to keep possession of the ball and that is exactly what it did in a stormy start that left the English side boxed in its own half.

“They played with a lot of pace up front,” said Arsenal captain Mikel Arteta. “We faced a top side in one of the most difficult stadiums to play in Europe. After you go 1-0 down here it is very difficult. We didn’t perform well enough tonight.”