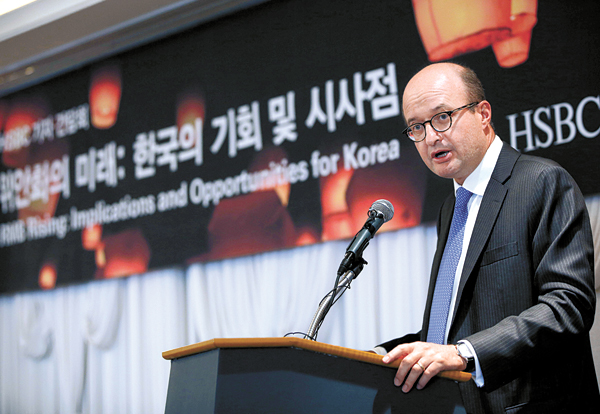 Martin Tricaud, the president and CEO of HSBC Korea, speaks during a press conference at the Lotte Hotel in central Seoul. He said his bank will provide more and better services for corporate customers in the Korean market. Provided by the company

Martin Tricaud, president and CEO of HSBC Korea, said the London-based bank is seeking more growth in the corporate banking market and is using the increasing cooperation between the Korean and Chinese governments to create a won-yuan direct transaction market.

Tricaud highlighted HSBC’s commitment to Korea, saying that the bank is still dedicated to supporting customers and the expansion of the Korean economy even though it shut down its retail banking business in July 2013. Tricaud took over as head of the Korea business in March of that year.

“HSBC is focused on supporting the economy and customers who have global connectivity, and this makes Korea very important for us,” Tricaud said in his first press conference at a hotel in central Seoul yesterday. “We wish to provide services for large Korean companies in their home country and also overseas.

“We are seeing many Korean company customers in around 50 countries,” he added.

The CEO said his strategy is simply to “do more and better.”

“We want to work more with corporate customers and financial institutions by using our strong global platform,” he said, “especially by using this RMB hub creation as an opportunity.”

HSBC Korea signed a memorandum of understanding with China’s Bank of Communications based in Seoul to cooperate on services for transactions between the won and yuan in July after Chinese President Xi Jinping visited Seoul and announced the creation of a won-yuan direct transaction market in Seoul.

“HSBC is a leader in RMB internalization as we were the first bank to settle RMB trades in Hong Kong five years ago and the first to issue an RMB bond outside the Chinese territory,” Tricaud said.

“We will do everything we can to support customers, Korean or Chinese, who wish to address markets in RMB from Korea.”