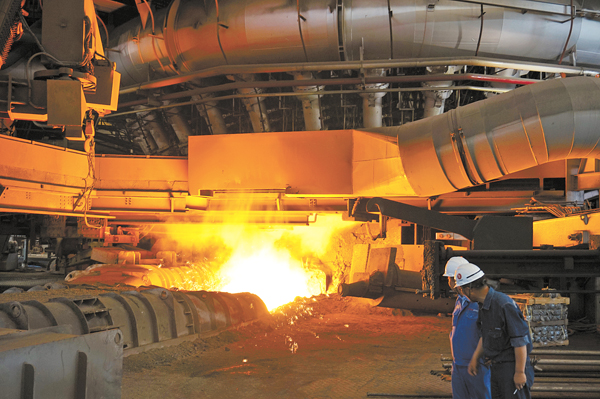 The steel mill operates in Krakatau Posco in Cilegon, Indonesia, on Monday. The mill, completed on Dec. 23, is a joint venture of Posco and Indonesia’s state-run Krakatau. Provided by the company

“If you look at the history of steel industry, there is no mill on the Equator because it’s not easy to work in hot weather,” says Min Kyung-zoon, president of Krakatau Posco. “We are doing something that is outside the realm of common sense.”

The mill is a joint venture of Korea’s largest steelmaker, Posco, and Indonesia’s state-run steelmaker, Krakatau, in which the Korean company has a 70 percent stake.

It takes about 90 minutes, depending on Jakarta traffic, to drive to the industrial city of Cilegon on the northwest coast of the island of Java. Here, Posco is trying not only to make appositive change in the city, but in all of Indonesia. 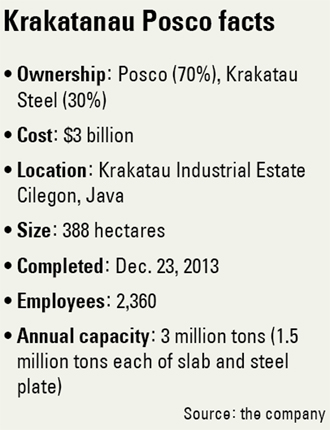 For Posco, the success of Krakatau Posco - which has an annual capacity of 1.5 million tons each of slabs and steel plates - is important because it is the company’s first integrated steel mill overseas.

Considering that Posco was established 46 years ago in Pohang, North Gyeongsang, primarily by acquiring foreign technologies and know-how, it also signals the company’s evolving role in the global steel industry.

“There is no tariff among ASEAN [Association of Southeast Asian Nations] members, but for other countries, the import tariff is huge,” said Min. “If we can provide them with material from Indonesia, we will be more competitive.”

Krakatau Posco was completed Dec. 23 after 30 months of construction that were not, by any measure, easy.

“Since it is a country that lacks steel, we even had steel bars that were stored near the construction site stolen in just a day,” says Park Heyong-keun, a construction manager at Krakatau Posco. “It also wasn’t easy to encourage locals to meet the work schedule in the hot weather.”

Even after construction, the company had to halt operation for a week because it found a small crack at the bottom of the furnace. Its first steel plate of 50 tons was rolled out on Jan. 22.

Today, 8,300 tons of melted iron are produced from the furnace of Krakatau Posco and 3,400 tons of steel plates rolled out daily.

Considering that Posco produces 38 million tons of melted iron annually at its mills in Pohang and Gwangyang, the production volume from Krakatau Posco is small, but significant in a country like Indonesia that imports 60 percent of its steel.

“All employees, whether they are Korean or Indonesian, are moving forward with one mind that they want to create a new success story here,” says Jeong Tae-soo who manages external affairs at Krakatau Posco. “Since it is the early phase of operation, we can’t relax. We have to only focus on work like what we are doing right now.”

As the production moves into full swing, sales of the product are on the rise. Last month, Krakatau Posco’s slab and steel plate sales each exceeded their target of 200,000 tons.

About 70 percent of Krakatau Posco’s production is sold in Indonesia. Slab is purchased mostly by local companies like Krakatau Steel and Gunawan, while heavy industry companies like Citra Shipyard and Korindo buy steel plates.

“Indonesia’s steel market is the largest in Southeast Asia, but since its steel use per capita is only about 60 kilograms, much growth is still possible,” says Min, the company president.

However, there are challenges ahead because Posco is not the only partner of Krakatau Steel. Recently, the Indonesia steelmaker and Japan’s Osaka Steel reached an agreement to build a steel plant here focusing products used in the construction industry.

However, Posco says it is confident it can be the leader in the Indonesia steel market.

“Although Indonesia’s iron ore is cheap, the quality isn’t that good, so in order to put less pressure on the facility and stabilize operations, we think 30 percent is the right level,” Min said. And Krakatau Posco is set make a leap not only in quality, but quantity,. The company said it is currently in talks with the local government and Krakatau Steel to double the capacity of the mill.

“We will complete investment discussions by the first half of next year, and the construction will begin within two years after that,” says Min. “For the second stage, we plan to expand the furnace and steelmaking, and construct a hot rolled steel factory. If needed, we also are considering cold rolled steel and plating processes.”

Meanwhile, the city of Cilegon has reaped an economic windfall from Posco’s investment. Among Krkatanau Posco’s 2,360 employees, 2,180 are locals. Since 2011, Posco has been offering a vocational education program to area residents.

“Job creation is the major improvement since Posco arrived here, and the city has become more vital because people from other regions are coming here,” says Cilegon Mayor Tubagus Iman Ariyadi. “What we are expecting from Posco is the company’s support for Cilegon’s city development master plan.”

Residents near Krakatau Posco are being encouraged to relocate not because of environmental concerns, but because of the city’s plan to separate industrial and residential zones.

“We expect the city to develop in step with Posco,” Ariyadi says. “Steel is a core industry of the country and demand for Indonesia’s steel is increasing. Posco has made a smart choice in coming here.”