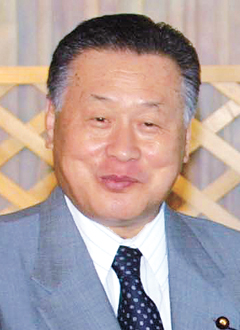 Former Japanese Prime Minister Yoshiro Mori is expected to carry a handwritten letter from current leader Shinzo Abe to President Park Geun-hye during a visit to Korea that begins today, according to diplomatic sources.

Mori, 77, will be in Korea to attend the opening of the Incheon Asian Games as the head of the organizing committee for the 2020 Summer Olympics in Tokyo. At the same time, he is expected to act as a special envoy for Abe to thaw strained diplomatic relations between Korea and Japan.

According to sources in Seoul and Tokyo, the former prime minister is expected to visit the Blue House in person to deliver Abe’s wishes to improve Korea-Japan relations.

“Former Prime Minister Mori meeting President Park, following Foreign Minister Yun Byung-se’s first talks with Japanese Ambassador to Seoul Koro Bessho on Sept. 14, is a work in progress of seeking ways to improve the countries’ relations,” said one diplomatic source. “However, Prime Minister Abe’s message will not have any specific details such as resolving the comfort women issue.”

Park has held the position that until Japan shows sincerity in apologizing for its imperial army’s sexual enslavement of young girls and women before and during World War II, she will not meet one on one with Abe.

Mori met with the new Korean ambassador to Japan, Yoo Heung-soo, in Tokyo on Tuesday to discuss plans, according to an official.

This will mark the second time a former prime minister will meet with Park since Taro Aso, currently the deputy prime minister and finance minister, attended her presidential inauguration in February last year. Aso served as prime minister from 2008 to 2009.

A diplomatic source based in Japan said, “At that time, Deputy Prime Minister Aso made a long-winded address on historical issues, leading to soured bilateral relations, so this time around during Mori’s visit, he is expected to be especially cautious in regards to the words he chooses.”

There is special interest in whether Mori will push for a Korea-Japan summit on the sidelines of the Asia-Pacific Economic Cooperation (APEC) leader’s summit in Beijing in November.

Park and Abe are both scheduled to attend the conference in Beijing. They have yet to hold bilateral talks, but they held trilateral talks spearheaded by U.S. President Barack Obama in March in The Hague on the sidelines of a nuclear summit.

Mori’s role in delivering Abe’s letter may lead to a meeting of the two countries’ foreign ministers, which in turn may lead to a leaders’ summit.

Tokyo is pushing for talks between Korean Minister of Foreign Affairs Yun Byung-se and his Japanese counterpart, Fumio Kishida, on the sidelines of the UN General Assembly session in New York this month.

Another foreign affairs official said Seoul will also wait to see how the first vice foreign ministers’ strategic dialogue between Korea and Japan since Park’s inauguration scheduled for next month turns out. “A Korea-Japan leaders’ summit at APEC can be decided upon only if there is enough pretext,” he said.

Mori recently served as a messenger for Abe in a meeting with Russian President Vladimir Putin, whom he has a personal relationship with.