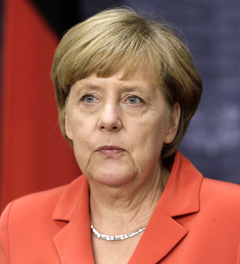 German Chancellor Angela Merkel was selected as the winner of the Seoul Peace Prize for her role in awakening global awareness of human dignity, the prize committee announced yesterday.

The Seoul Peace Prize Screening Committee said it had a final review of the 12th Seoul Peace Prize yesterday and selected Merkel as its recipient. Chancellor Merkel was selected “in recognition of her outstanding efforts to promote the global awareness of human dignity by apologizing and taking responsibility for past wartime crimes, her contribution towards promoting peace, and preventing war and terrorism through international cooperation,” said Lee Chul-Seung, chairman of the Seoul Peace Prize Cultural Foundation and the award’s screening committee. “Her leadership and dedication to overcoming the Euro Crisis, and her efforts to resolve such issues as climate change and sustainable growth was also recognized.”

Established in 1990 to commemorate the Korean capital city’s successful hosting of the 1988 Seoul Olympics, the Seoul Peace Prize has been recognized as a prestigious award in the international community. Among its laureates, Doctors Without Borders, former United Nations Secretary General Kofi Annan and Grameen Bank Establisher Muhammad Yunus all received the Nobel Peace Prize after receiving the Seoul Peace Prize.

It is the first time that the Seoul Peace Prize was awarded to an incumbent head of a government. The award ceremony will take place in Seoul at an unspecified date and the winner will be awarded a diploma, a plaque and a prize of $200,000.

The committee said Merkel accepted the award and will visit Seoul to receive it.

Merkel is the first German chancellor to be born after the Word War II, and she has constantly apologized for the war crimes of her homeland since she took office in 2005, the Seoul Peace Prize Cultural Foundation said in a press release.

Emphasizing the need for self-reflection, Merkel apologized for Germany’s bloody past in a speech at the United Nations General Assembly in September 2007. “Each and every German chancellor before me has shouldered Germany’s special responsibility for the existence of Israel. I, too, pledge to live up to this responsibility that our history has bequeathed us,” she said.

She has repeatedly apologized for the holocaust. In a speech to the Israeli Knesset in March 2008, she said, “The mass murder of 6 million Jews, carried out in the name of Germany, has brought indescribable suffering to the Jewish people, Europe and the entire world. The Shoah [Holocaust] fills us Germans with shame. I bow my head before the victims. I bow before the survivors and before all those who helped them so they could survive.”

She is also the first German leader to visit a former Nazi concentration camp, Dachau, in August 2013.

“She has repeatedly apologized for Germany’s past war crimes,” said Lee. “She is conveying a message to the countries that are denying their past war crimes and existing dictatorships that are infringing human rights.”