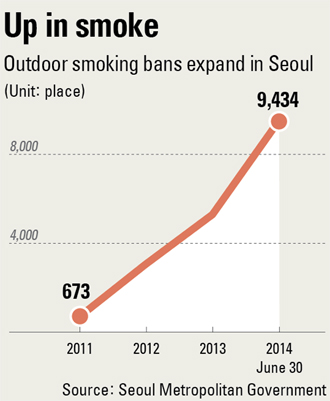 On Aug. 26 2004, South Korea’s Constitutional Court acknowledged a citizen’s right to smoke as well as one’s right to refuse exposure to cigarettes and tobacco products, ruling that the two are both related to an individual’s pursuit of happiness and privacy.

However, it added that the right to choose not to smoke, which conforms to one’s constitutional right to a healthy and pleasant environment, trumps a person’s right to smoke.

That decision, now a decade old, has since become a formidable foothold for the country in legislating smoking regulations, though consistency in those policies is still lacking.

In Europe, smoking indoors or in enclosed areas is largely prohibited, though Korea continued to maintain a passive stance on the issue until 2010, when local authorities were given the authority to independently designate no-smoking zones due to revision of related law.

After the revision, the Seoul Metropolitan Government began defining no-smoking zones in the city, promoting its campaign with the slogans “Clean Seoul” and “Smoke-Free Seoul.”

At first, the Seoul government prohibited smoking in public places, such as squares and parks, but later in March 2011, it outlined a large-scale no-smoking zone in central Seoul that stretched from Gwanghwamun
Square to the Cheonggye Stream and Seoul Square.

Authorities could easily draw up no-smoking zones because there were few complaints related to restricting smoking in outdoor places, which is not related to property rights, said Professor Lee Chang-won, who teaches public administration at Hansung University. Local authorities even competed in the expansion [of those zones] for the good of their citizens.

The Seoul government prohibited smoking at bus stops on pedestrian islands the same year, and in 2012, the Gangnam District Office and Seocho District Office set up another large-scale no-smoking zone along Gangnam-daero and buildings along that stretch.

We will further expand no-smoking zones given that 81 percent of people are still experiencing outdoor secondhand smoking [as of 2013], said Kwon Yeong-hyeon, the head of Seocho Public Health Center.

Such policies rapidly increased the number of no-smoking zones in Seoul, to 9,439 this year. That’s about 14 times the 673 present in 2011, according to the city government.

Unlike Europe and the United States, which mostly ban indoor smoking and are more generous when it comes to outdoor smoking, Korea initially expanded its no-smoking zones outside, with its indoor regulations following.

Smoking regulations were only gradually introduced in restaurants starting from last year, for example.

There is no clear distinction between indoor and outdoor regulations in Korea’s no-smoking policies, said Kim Chang-bo, director-general of health policy for the Seoul city government. The pace at which no-smoking zones are expanded should be controlled, and more indoor regulations should be reviewed step by step.

An international trend in no-smoking policies is to prevent secondhand smoke indoors, said Professor Cho Hong-jun, in the Asan Medical Center’s Family Medicine Department. Designating too many no-smoking zones without consideration may harm the effectiveness of these policies and make them less convincing.

Incomplete indoor smoking bans have also caused conflicts among businesses. One building near Gangnam-daero has an indoor driving range on its basement floor, where smoking is allowed, while a postnatal care center spans its third floor all the way up to the sixth. Smoking is strictly prohibited there. Such situations are part of exceptions made by the government.

The World Health Organization recommends banning smoking in all public indoor places, though the government has exempted cafes and restaurants with smoking booths and billiard halls from no-smoking regulations over fears of backlash.