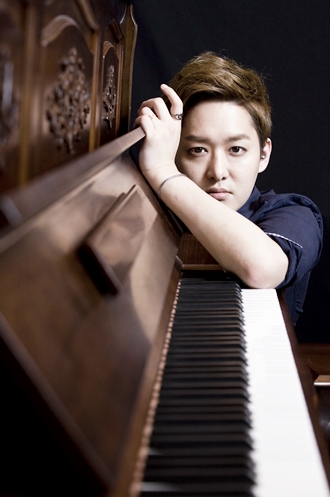 Shin Ji-ho, 27, has an overwhelming number of titles that precede his name: pop pianist, beast pianist, musical actor and composer, to name a few.

And there’s also “flower boy” - not so much a reference to his talent but to the fact that he is lucky enough to have a natural gift and a thriving career.

Shin first came under the spotlight when one of his videos on YouTube garnered more than 100 million views. His other arrangements of K-pop and children’s songs then went viral internationally.

Soon after, “Star King” on SBS requested he perform on the national television show in 2010.

But what made headlines after Shin’s first mainstream public appearance wasn’t his stage performance, but his looks. His appearance, which had viewers wondering whether or not he was an idol star, led to Shin signing a record deal and debuting in 2010 with “Music Box.”

Now on his second album, “eyEMOTIONS,” which was released in July, Shin told the JoongAng Ilbo, an affiliate of the Korea JoongAng Daily, that he’s eager to diversify in terms of his work.

“I really end up doing everything I lay my eyes upon because I have a lot of enthusiasm,” he said, adding that he wants to work as a screen actor, musical actor, musical director and more.

And when he landed a role in the JTBC drama “Secret Love Affair” (2014) earlier this year, acting as the rival of a prodigy pianist played by Yoo Ah-in, there was a sense of hope in the air for Shin.

“I memorized every line on the 10-page script before the audition in hopes of getting cast as a passerby or something,” he said.

After Shin presented his arrangement of a song by Russian pianist Sergei Rachmaninoff (1873-1943) to the director, he ended up playing one of the lead roles.

“I think the director saw my blazing desire, because when I finished he gave me a standing ovation,” the pianist said with a laugh.

Shin fell in love with the piano at the age of 4 but had to abandon his dream of pursuing a career in music when faced with his parents’ disapproval. He flew to Tennessee for middle school to study English, but his obsession with playing the piano never left him.

“I play the piano while I work, and again during my free time,” said Shin, describing it as an “addiction.”

“I grow sick of it when I practice the basics, but end up falling in love with it again when I play my favorite K-pop songs,” he said, calling it a “love-hate” relationship.

As for the question of what kind of pianist he wishes to become, Shin answered: “I hope my name becomes a brand in itself. I want to become a pianist that performs music no one could ever imagine.”